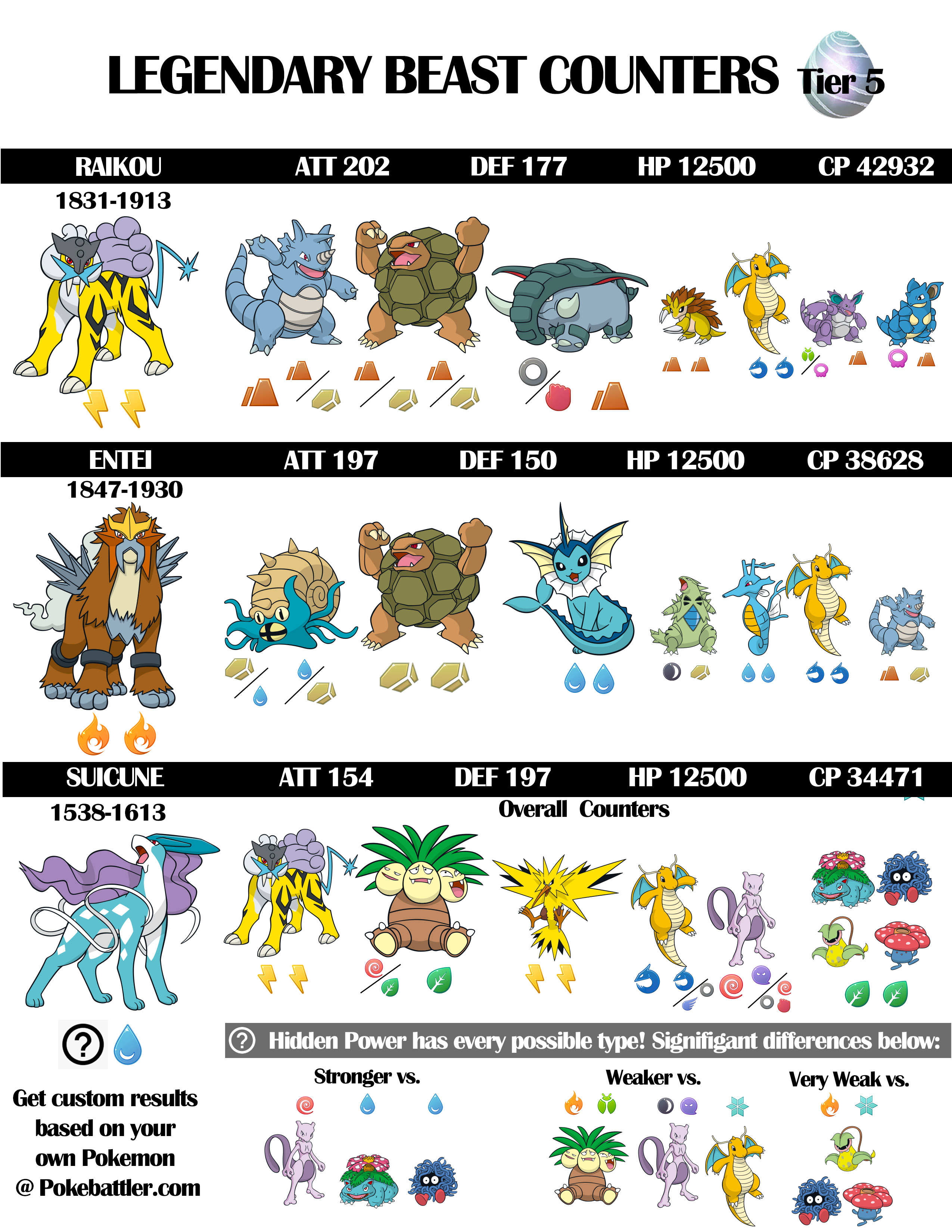 As usual , the infographic is intended to be easy to use. The best Pokemon are to the left. The best move types are in the upper left under each Pokemon quick attack followed by charge attack. Hidden power section has the type of hidden power on top.

Yesterday, big news was dropped on us. The legendary beasts Raikou, Entei, and Suicune were announced. Work began immediately on making an infographic.  Late in the day, more breaking news came out. Suicune no longer had Snarl and now had Hidden Power! Hidden Power was not supported correctly by Pokebattler which meant major changes in terms of both usability and calculation accuracy. More on this in the hidden power section below.

The 3 legendary beasts will be rotating over the next 3 months between continents. Currently, Raikou is in North and South America. Entei roams Europe and Africa. Suicune can be found in Asia and Australia. The 3 beasts are each a different type, just like the Eeveelutions, and have the same weaknesses as their counterparts.  Overall, Entei is the weakest due to the existence of very strong rock and water counters. Suicune is a bit easier, especially due to the wide availability of strong electric and grass counters.  Raikou is the most difficult due to mud slap being a terrible move and Ground attackers being immune to Raikou’s electric attacks. This causes incoming energy generation to be slower and causes a slightly longer fight!

The following is a general guide to the legendary beasts. To make your own custom raid guide with your own Pokemon, add your Pokemon to the Pokebattler Pokebox.

Raikou is the strongest of the legendary beasts and is quite vulnerable to ground and rock moves. Ground attackers are ‘immune’ to his electric moves which mean only taking 51% of damage in Pokemon Go. Unfortunately, ground attacks are very weak with Mud Slap and Earthquake being terrible compared to the best moves in other attack types. But that’s the best we have so mud slap it is.

Our huge tanky Rhino is the best counter to Raikou. You are looking for double ground preferably but Stone Edge is so good it isn’t too far behind. If you are looking to TM for this fight, this is the Pokemon to be using your TMs for. Leave the rock moves to Golem.

Do not TM your rock/rock golems for this fight! It’s not worth it at all. You can use them here even though they are a bit worse than ground/ground. If you have Ground/Ground then use it of course but I beg of you, don’t TM away Stone Edge!

Donphan rounds out the top 3 with a decent move set. I wouldn’t power him up though as there are better options. Either quick attack is fine, but you are looking for Earthquake for an attack move.

Los Angeles players unite! Those of use in rock biomes are swimming in these guys and they make good expendable Pokemon if you are short on revives. Sandslash is a ground Pokemon and has double ground moves. He’s normally too squishy to be useful but against pure electric, he’s not so bad!

Dragonite makes the list on sheer generalist power alone. If you have some high-level ones, they may be better than your Rhydons and Golems. Add your Pokemon to the Pokebattler Pokebox to find out if they are!

If you were looking for something to use these 2 against, this is the fight you have been looking for. They both have earthquake and a quick move or two to be

Entei is the weakest of the legendary beasts and is quite vulnerable to rock and water moves. Just like Flareon and Moltres, you are looking for strong rock and water moves and rock and water typing. Note that even if you have Suicune with hidden power water, Suicune is STILL not a good counter to Entei. Its stats are simply too low. Vaporeon is far superior.

Omastar heads the list again with legacy rock quick move and Hydro Pump topping the chart. If you are like most of us and don’t have Rock Throw Omastar, never fear, any move set works with Omastar! You probably should get rid of mud slap because it’s terrible though and we are all drowning in quick TMs at this point.

Golem is very close to Omastar and better if you don’t have legacy moves due to the power of Rock Throw. As mentioned above, Golem should be your main rock/rock Pokemon and you want a few of him. I’ve got 6 which gets me 3 bonus balls almost every time

Vaporeon is the strongest water Pokemon in the game and tops the list. As usual with water types, you want Hydro Pump. The big attacks have an interesting effect on the bosses energy bars. I will write an article on this at some point. Short version, bosses get their energy bars overflowed FAR more than we do.

The jolly big dinosaur does well with Stone Edge against Entei but is hampered slightly by his quick attack. If you have a high-level Tyranitar it may still be your best option though!

The cute little seahorse is a bad Vaporeon but it’s not that much worse. If you happen to live in a water biome this might be a good option for you.

Dragonite makes the list on sheer generalist power alone. If you have some high-level ones, they may be better than your water and rock types! Once again, add your Pokemon to the Pokebattler Pokebox to find out.

Rhydon makes the list on Stone Edge alone. Not a great option but you may have a high level one from the stagnation meta which will do in a pinch.

Suicune is quite interesting as this is the first significant Pokemon to feature Hidden Power as a move. After hours of work, it turns out hidden power move type does not matter all that much on defense and the differences are subtle. The infographic shows all the major types to watch out for. Assuming the odds are 50% Extrasensory and 50% Hidden Power, the chance that you will get totally hosed by a quick move is quite small! In general, you are looking for good electric moves like Wild Charge and Thunderbolt or good grass moves like Solar Beam and Leaf Blade.

Depending on the order of legendary beasts in your area, Raikou may or may not be available for you. Raikou has amazing move sets which make it a great attacker against a weak water Pokemonn.

Exeguttor is the strongest pokemon in the game with Solar Beam and does well against almost every quick move Suicune has. It is a bit vulnerable to fire and bug though which moves it down a few slots but is still quite usable regardless

Every serious raider should have a Zapdos or two and they make excellent counters to Suicune. If you have the opportunity to get Raikou first, then power that up instead! Whether you power up Zapdos or not with Raikou coming out is a big question. I would recommend no and just use Exeggutor and Dragonite

Once again, most people have a good Dragonite and it will likely make the top of your lists. A safe bet for all 3 beasts. It is a bit weak to ice hidden power but still usable!

Unfortunately, due to the nerf to Mewtwo, it is not a good counter to very many pokemon. You can definitely use Mewtwo here though! Every moveset works with Shadow Ball being the best overall. In general I would suggest either Shadow Ball or Focus Blast for your charge move so if you don’t have one of those 2, TM away. Mewtwo does particularly good against psychic moves but not so good against dark and ghost hidden power so be careful.

Venusaur is the 2nd best grass Pokemon and does especially good vs. water hidden power. It is not hampered like the next 3 grass Pokemon by fire or ice moves, consistently sitting at #6 for every moveset.

All 3 of these grass Pokemon have access to strong grass moves and in general, do well. Fire and ice Hidden Power are absolute killers for these 3 squishy Pokemon though so be on the lookout. Of the 3 Victreebel is the most interesting as a relatively high DPS attacker against Suicune for most move sets – sometimes making top 4 in time to win.

Hidden Power came as quite a surprise to everyone and was quite troubling for me. It took over 6 hours to add support for this annoyingly bad move. Hidden power is not good. It will not make your Suicune any good. I hate this move with a passion. It is worse in every way than water gun which would have been a better attempt at making Suicune relevant. I added every hidden power type including Fairy which may or may not exist. Luckily, Hidden Power is such a bad move it doesn’t matter which type you give hidden power. You can’t turn brass into gold.

There, that felt good to get off my chest.

So hidden power is added and support for it is being added across the site. On the plus side, more move icons for everyone! Hurray! Here is a sneak peak of the layout and a very clear explanation of why it was a huge waste of time. Check how nearly identical the randomly selected hidden power on the left is with the default normal hidden power! 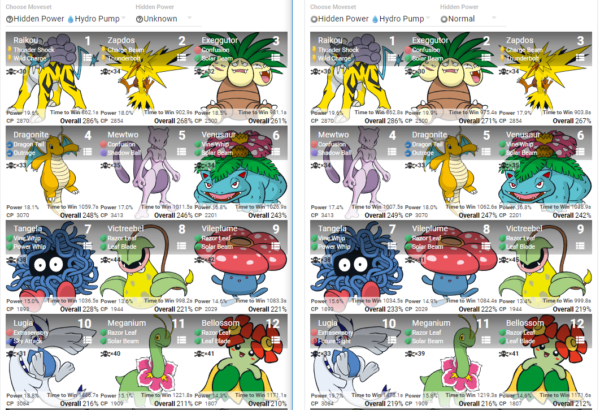 These changes, along with the addition of the legendary beasts to the rankings, Pokedex and potential raid attackers will be rolling out tomorrow.

Singzy of Reddit created an excellent guide to detecting which hidden power Suicune has with just 3 pokemon.  This should help the curious! The basic strategy is to join with the 3 pokemon, record wether the fast attack is super effective, not effective or regular against each of the 3 attackers. Then look it up in the chart! Note that this chart assumes that Normal and Fairy type Hidden Power does not exist which may or may not be accurate. 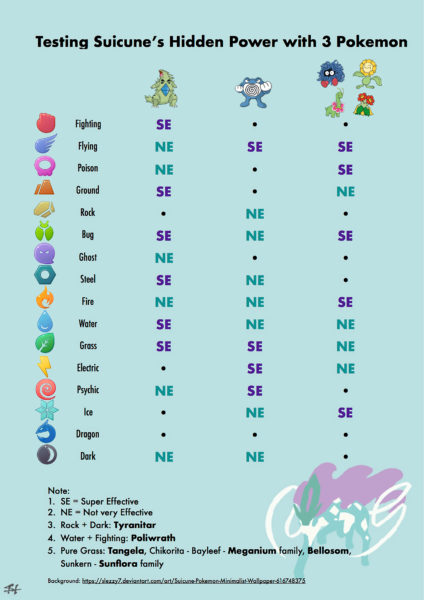 I’m excited to try out the legendary beasts. I have plenty of Rhydon and Golem attackers so I don’t need to worry about powering up anything just yet for Raikou in America. I will be blowing all my rare candies on my best 1-2 Raikou to prepare for Suicune. Like many others, I am quite short on stardust these days and could desperately use some stardust for participating in raids or attacking gyms or something. Collecting Pokemon has become a more rare part of the game with the addition of raids, while the number of Pokemon you need to power up has gone up! This is a big game balance issue that I hope Niantic addresses somehow.