Before we start discussing which Pokémon are useful and worth the Stardust investment, we need to think about what makes a Pokémon strong.

Every Pokémon in PoGo has three different base stats:

In addition to these base stats, which are equal within one species, every Pokémon has individual values (IVs), that are added to the base stats. IVs for wild Pokémon range from 0-15, and from 10-15 for Pokémon hatched from eggs or caught after raid battles. Wild Pokémon therefore have an average of 50 % perfect IVs, while hatched Pokémon and raid bosses have an average of 84 % IVs.

A Pokémon’s total stats are given by (Source):

(combat power multiplier) is a constant that depends on the Pokémon’s level (details). Typical values for good Pokémon for attack, defense and stamina are around 150-200, so IVs add up to 10 % of the base stats.

Since IVs can have a significant impact on a Pokémon’s strength, it is worth checking them if one wishes to identify the strongest Pokémon. Outside of the game there are several websites and apps that use the given information on the Pokémon screen to estimate the IVs. The game itself has the appraisal feature which provides a rough estimation of the IV range. A combination of ingame function and IV app usually leads to precise results.

Before using external apps or websites I personally prefer to use the in-game appraisal function to pre-filter the caught Pokémon, transferring every Pokémon below 80 % IVs. I do however make some exceptions for Pokémon with a high level, a high attack IV (13-15) and a useful evolution that can be effectively used to battle without the investment of Stardust (i.e. high Eevee, Machop, Exeggcute, …).

To make use of the appraisal function one must understand the Team leader’s messages first. They always rate the overall IV percentage first (see Table 13), followed by a rating of the Pokémon’s highest IV: attack, defense and/or stamina (see Table 14). They also rate the Pokémon’s size, which has no impact on the game to this point apart from a few specific medals in the Trainer screen.

A Pokémon’s combat power is roughly given by:

How does a Pokémon’s battle ability improve with its level?

To answer that question one should look at the CPM, the CP and the required Stardust at every level, relative to its respective maximum value (see Figure 7). 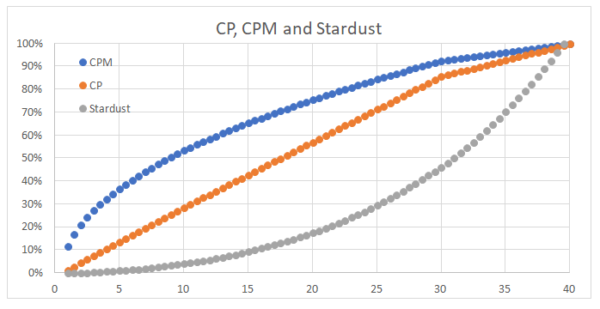 Figure 7: Combat Points, CPM and depending on the Pokémon level (Source) 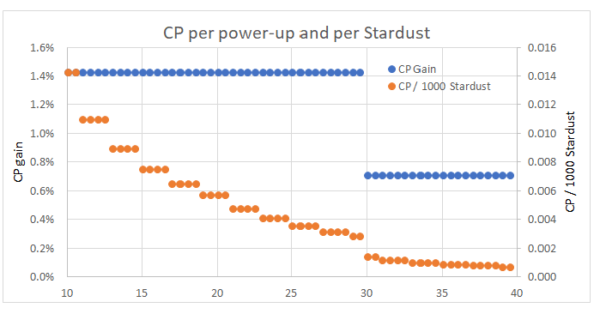 The following is notable:

Stardust is the most limiting factor in the game, and one should therefore spend it carefully and efficiently, making sure to look at the CP gain relative to Stardust cost (see Figure 8). One can clearly see that the efficiency gains quickly decrease at higher levels. More precisely: it gets halved from level 20-29.5 and from level 29.5-30.

Powering up a Pokémon past level 30 should only be done if one has a large surplus of Stardust, the Pokémon in question has at least 85 % perfect IVs, and if one already has a good amount of common raid boss counters at level 30. A Pokémon with bad IVs at level 40 can be worse than the same Pokémon with perfect IVs at level 30! There is one exception apart from pure vanity that can justify power-ups above level 30 and that is the existence of a damage break point (see section 6.5)

There are two relevant qualities:

To successfully complete raid battles within the time limit, DPS is most relevant. The TDO only determines if the player must revive or join the fight with a new team. An ideal attacker has high DPS as well as high TDO. High DPS attackers are usually preferred because they can quickly deal high damage and therefore get rewarded with more premier balls (see 4.3 Premier balls), especially during raids when the full time allotment is not needed for completion. Besides the Pokémon’s base values there are two more major factors:

So for example, using a Golem with rock type moves against a Moltres with fire type moves results in the Golem taking around 30 % less damage and the Moltres taking almost double the damage, when comparing the Golem to a “neutral” attacker.

Hence one should try to get attackers with attacks of the same type (that ideally match the attackers Pokémon type) to better exploit the opponent’s weakness. The best way to find out what attackers are best against every Pokémon is by using simulation tools such as the Pokébattler (see Pokébattler Guide).

The animation time is only relevant for defenders in terms of damage potential, because defenders have an additional delay of around 2 s that has a more negative impact on short moves with low damage per animation than on slow moves with more damage. For attackers the main impact of the animation time is when one is planning to dodge, which is much easier to do with quick moves.

If we want to compare the effectiveness of fast moves, we should look at the damage per second (DPS) and the energy gain per second (EPS).  Usually fast moves have either high DPS or high EPS (example see Table 16). In the game one can only find the damage per animation, but most IV apps also show DPS, EPS and animation time for the Pokémon’s moves. Since the fast move’s performance also depends on the EPS, one should always also take the charge move into account, when comparing fast moves.

Charge moves have the following properties:

The biggest difference between charge moves is the energy cost. There are moves with one charge bar (100 energy), 2 bars (50 energy each) and 3 bars (33 energy). All charge moves are superior to the fast moves in terms of DPS, so one should always use them to maximize damage output. That also means that a Pokémon’s DPS is significantly lower when it faints just before it is able to use a charge move (thus “wasting” the charge).

Most DPS rankings one can find online and in IV apps for example include the Pokémon’s cycle DPS. The only thing DPS rankings don’t consider is the energy Pokémon gain when they take damage (0.5 energy per HP lost, Source). This is only included in simulation tools such as the Pokébattler.

When comparing simulations to reality one also must consider “wasted” energy, i.e. when the Pokémon gets hit while the energy bar is full and the charge move hasn’t been used yet. Single bar moves are more likely to waste energy compared to multi bar moves since they can only be used with a full bar. So sometimes move sets that are superior in theory can perform worse in real battles due to these “wasted charges”.

The damage calculation is given as follows:

is the move’s damage,  is the bonus factor for Pokémon using moves that match their type, and  is the type-effectiveness factor (Source).

One should note that every move deals at least 1 damage and that the result gets rounded down. This results in damage break points depending on the attackers Atk and the defenders Def values. The lower a move’s base damage is, the less break points it has. This means that the damage dealt for some moves against the same defender doesn’t increase for several power-ups, but when it “jumps” it often increases significantly (mostly around 10 % for fast moves).

In some cases there are important defensive break points, e.g. a Gengar against a Mewtwo with the fast move “Confusion”. Assuming perfect Def IV, the Gengar can only survive long enough to be able to use its strong charge move “Shadow Ball” if it is level 32.5 and above. 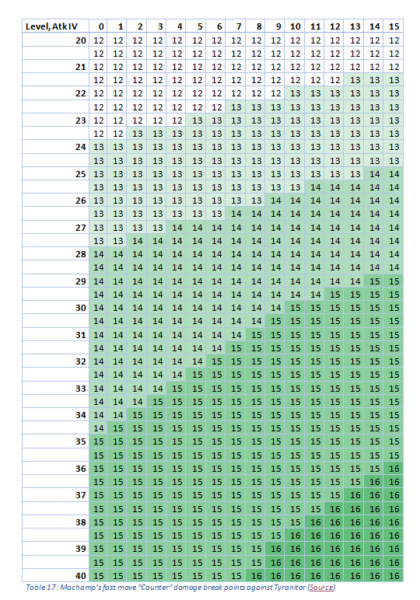