Our Raid Counter Guide allow you to see which Pokemon ‘counters’  will work best against different raid bosses, helping you maximize your damage, get more balls, save time and potions, solo better and more.

To view the best raid counters, simply click on your desired raid boss from one of the menus organized by ‘tier.’ 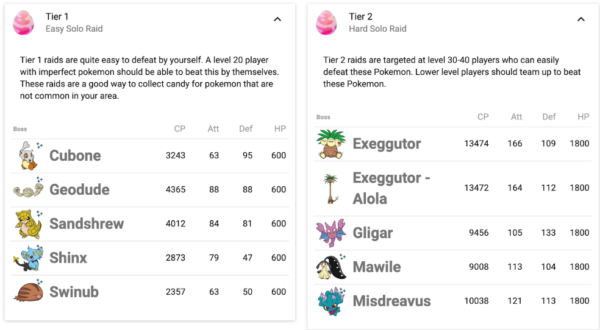 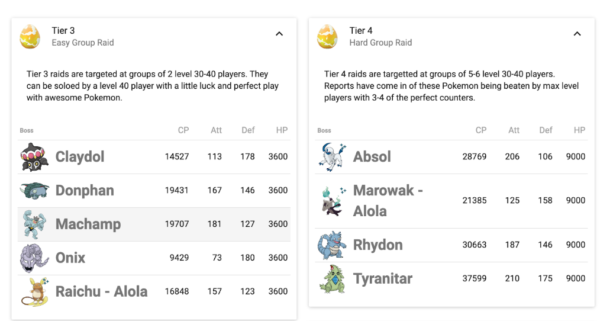 Or scroll down to the custom raid box and fill out exactly what you’re looking for.

Filling out the Custom Raid Box

Click which tier your boss belongs in. ’ Legacy’ bosses are bosses not currently in raids but were available in the past.

Based on what tier you choose, you’ll be given a choice of different raid bosses that are currently available (or previously available if you chose legacy). Choose the one you want from the menu.

These are your playing style. Most people use no dodging in raids where running out of time is an issue, and depending on bugs, the effectiveness of dodging can be iffy. But if you’re a great dodger, then choose one of the dodging options! Basically just choosing the strategy closest to your playing style.

We added dodge strategies as a way to fine tune the attack strategy algorithm to give even more realistic results. They are used to account for human error, bugs and other variations. For example, when you choose  “realistic dodging’ you will get a realistic result that accounts for human error, game bugs and delays, etc. Dodge strategies aren’t useful if you select the no dodging attack strategy since you aren’t dodging at all. These are the definitions for each dodge strategy.

If you have a Pokebox with us, this will give you the option of using your own Pokebox, another Pokebox (you’ll need their trainer number) or results by level (these will give you Pokemon at the chosen level with perfect 15, 15, 15 IVs). If you choose level, make sure you choose the level you want on the box to the right. If you don’t have an account with us, you will only be able to select ‘Their Pokebox’ or ‘By Level.’ (You can create a free account to use this feature).

If you choose My Pokebox, it will automatically fill in your trainer number. If you choose Their Pokebox, you’ll need to fill in the number on your keyboard, or use the arrow key to select it.

Select the weather for your raid. Remember ‘Extreme’ weather’ just means weather has no effect on the game. Weather can have a strong effect on different counters and bosses, so don’t forget this part!

This will automatically be ‘average’ (the most accurate) if you don’t have at least a ‘Supporter’ Level subscription. If you do, you’ll get an array of choices for how ‘lucky’ you want your battle to be. Higher level subscriptions get more options. As all raids are random, there is a range of possible outcomes. Average luck gives you the middle result, not lucky or unlucky in terms of how well you do vs. how well the boss does against you. If you’re a supporter or higher and you choose a higher lucky percentile, like 75%, that means your result will be 25% luckier than average. Looking at the highest percentiles give you an idea of the very best performances you can hope for which is helpful for highly difficult solos or duos etc. where you want to know whether or not it’s impossible. But for most people just wanting to see the best counters and how they’ll do, average luck gives you the answer you’re looking for!

This is an option for those with a Patreon account. It is always set on auto. It will automatically choose how many additional trainers you should have based on the difficulty of the boss. Tier 4 or 5 Bosses automatically get 5 random battle parties appropriately powered to ensure the boss gets the expected amount of energy to do attacks. However if you want to see a custom number of trainers, simply use the menu to choose the number you want. You can choose up to 19 trainers, plus yourself, to equal the max 20 trainers per raid the game allows.

If you already know the moveset of your boss, or want to look at counters by specific moveset, you can select it in the menu above the listed counters where it says ‘Choose Moveset’.

Pokebattler using ‘Monte Carlo’ simulations to calculate results. As every single raid fight is random, there are tons of different possibilities. Pokebattler looks at thousands and thousands of those possibilities and averages them out to give you the most probable results. Learn more about what that means here. You can increase the accuracy of these results, by increasing the number of simulations our site will perform for your results, by becoming a supporter though Patreon. Learn more about that here. (We charge for this as running simulations is more expensive for our servers).

If you scroll over the HD/Star icon, you can see just how many simulations were calculated to get your results!

How Results are Calculated

For the raid counters guide, the goal is to give the best analysis of each individual Pokemon as a potential counter. So the result you get are looking at each listed counter 6 times in a row. For example, if the top counter is a perfect IV, level 40 Raioku – the stats you see for that Raikou are as if you used 6 identical level 40, perfect IV Raikou in a row. So when you see stats on Power – or the amount of health the boss will lose, or time to win etc., that’s look at your identical team of 6 Raiku together.

The estimator tool gives you an idea of how many trainers it will take to take down a raid boss. This is calculated by looking at the top six counters listed below. Our other results, explained below, are calculated differently.

See What Happens if you Power Up

Click this option to be taken to the ‘Raid Advice’ Section.

See This Result As a Battle Party

Click this result to go to our Raid Simulator, which looks at the results of a team of the first 6 listed counters together, vs. each one separately. So if you want to see how your top 6 counters will do together against the raid boss, use the simulator! This link will build your ‘battle party’ for you automatically.

Your results will be sorted automatically with the estimator result. To see other results, click on the black bars in the right top corner (circled in red below) to see all the options.

Definitions of Each Sorting Option

This is something you can sort by, and also automatically shows up on each counter window at the bottom.  This rating weights various components differently based on empirical analysis of many different situations. In general, the formulas are weighted such that you should win the battle and in the case of raids, get 2 or 3 bonus balls without rejoining. Here are the equations.

This is an option to sort by, and also shows up automatically on each counter window. Power is the percentage of damage done to a raid boss’s health by 6 of that exact Pokemon in a row within the number of seconds possible for that raid (300 seconds for tier 5, 180 seconds for tier 4, etc.) So if power is at 25%, that means after six of that one Pokemon attack that boss and die, that boss will have 75% of its health left. If power is over 100%, that means that boss has died at least once. For example, if power is 250%, that boss has died 2 and a half times during the time 6 of that one Pokemon attack, within the raid time limit.

Rejoining will often help you win when there is time even if the win percentage is low. This is just looking at what happens if that counter, 6 times, plus additional trainers, all play through once without rejoining.

Win % is most useful for close solo scenarios where you will not always win. For tier 3 and below it can help you know if a particular fight is sometimes beatable with that Pokémon.

This is the amount of time it takes one Pokemon, cloned 6 times in a raid, fighting, dying, then being reborn until it defeats the raid boss. So if a Rhydon takes 1003.5 seconds to beat a Raikou, that means your infinite number of 6 groups of Rhydon took a total of 1003.5 seconds. If you look at the combat time, that’s how long it takes until all 6 Rhydon die. So here we see they only last 243 seconds, they die before the 300-second mark.

This tells you how much it takes to revive the health of your Pokemon after going after a raid boss. We use a basic, 20 HP potion as a baseline potion. Revives always heal half your health. We represent a revive as 5 potions (reason: because we say so). This is the actual equation used:

Deaths (5 + attacker HP/2/20) + last attacker damage taken/20 = Result. Remember that 5 we’re adding is the revive. So if a boss needs 50 potions, remember that 5 of that, multiplied by total number of deaths, is how many revives you’ll use. If 4 Pokemon die during the raid, then subtract 20 from your total needed potion count. And of course most people are using stronger potions to revive their Pokemon, but we only use basic potions for our stat. It still allows you to compare which Pokemon will need more potions.

Estimator is the easy way to see how many players it would take with this level of Pokémon. Technically it is similar to the time to win including rejoin time divided by the time available for the boss. Behind the scenes the math assumes that each player does as much damage as possible within the 180 or 300 seconds. It then divides the boss health by this damage done to give a realistic number of players required.

This is the total damage done by the same Pokemon listed 6 times in a row against the chosen boss.

Step by Step Example of Each Stat

Let’s look at Suicune counters. We’ll do generic level 40 Pokemon (as opposed to our own Pokemon from our own Pokebox). Our generic by level Pokemon are always perfect IVs, 15, 15, 15. We’ll also do no weather, no friendships, no dodging. We will sort using the “Estimator,’ (the definition of estimator is listed above) with ‘unknown’ moveset.

These are the results at the time of this article:

So we can see that Electivire is the strongest counter. To drill down for more information, we click on the Electivire box.

Look at all the data! Now let’s look at how some of these stats was calculated.’ Remember, we are looking at 6 identical Electivire in a row.

Let’s look at the strongest moveset for Electivire, Thundershock and Wild Charge.  So that means that if you took on Suicune solo (which would be suicide of course as he’s too hard for soloing) and didn’t rejoin, you would manage to reduce Suicine’s total health by 19.8% (under the ‘Power’ column). Time to Win is 780.6 seconds. Of course that’s longer than the time allowed, which is why you see the win % at zero, aka, you will 100% lose. And we see the Estimator is at 2.72, mean you’d need 3 teams of 6 perfect IV level 40 Electivire to take down Suicune at the very least.

If we look at the weakest moveset for Electivire, we see 6 of them in a row only reduce Suicune’s health by a mere 7.2%, and that you’d need 7.6 teams of 6 Electivires with Low Kick and Ice Punch to take down Suicune. This really illustrates how much move sets matter!

We hope this guide has been helpful and that finding the best counters will help you kick some Pokebutt!