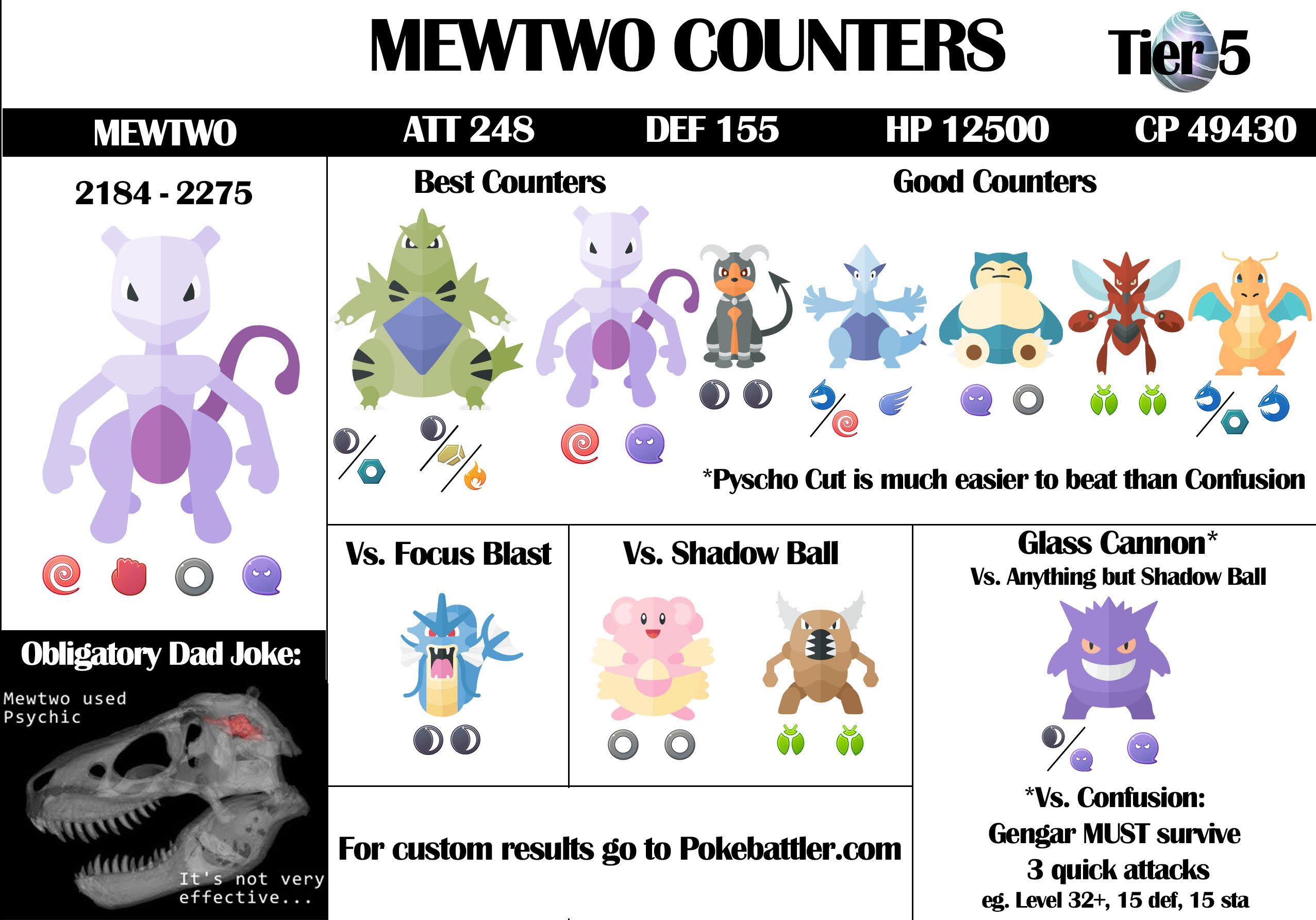 Mewtwo was released overnight in Yokohama as predicted! It is a single catch special edition. As such, you can not use Mewtwo to fight Mewtwo yet. Mewtwo will be released to the rest of the world via exclusive raid passes. Make sure to fight raids in lots of different gyms!

I was working very hard on the new personalized rankings for Pokebattler when I received an urgent message. Mewtwo’s stats had just been changed in the Game Master file! The base stats had dropped from 330 attack, 200 defense and 212 stamina down to 300 attack, 182 defense and 193 stamina. This was a huge nerf which is a good thing! Mewtwo with the old stats was completely overpowered compared to the rest of the available pokemon and would immediately unbalance the game. In addition, it would have been a rediculously hard raid boss and incredibly tough for the average mixed group to beat. Sure the users of this site would not have had issues beating mewtwo but your average player using Zen Headbutt/Dazzling Gleam Blissey against Mewtwo would sure have a rough time

Mewtwo is a tough Raid pokemon with only 2 real weaknesses, like Alakazam but with much higher defense and even higher attack.  He has 2 different quick attacks, Psycho Cut and Confusion.

Mewtwo is also equipped with 4 different moves, 3 of which are top tier on both offense and defense while the last gets a STAB damage bonus saving it from being total garbage

Tyranitar is by far the strongest counter against Mewtwo. He shrugs off Psychic attacks and has extremely strong Dark attacks at his disposal. If your Tyranitar has Stone Edge from fighting birds, don’t worry, the only thing better than a Bite/Stone Edge Tyranitar is a Bite/Crunch Tyranitar so you are in good hands. If for some reason you have any other moveset for Tyranitar, thats ok too! Even the worst Iron Tail/Fire Blast Tyranitar is as good as the 6th counter on the list. That said you should TM away that Iron Tail as fast as you can because its terrible and Fire blast is almost as bad. Leave your fire moves to Moltres, Flareon and Arcanine where they belong. Now on the chance that Mewtwo is carrying Focus Blast you really should try to dodge as it will hit you very hard. You are still doing ok though as even with Focus Blast, Tyranitar is still the #5 counter. But if you know ahead of time that you are facing Focus Blast, you really want to be using the #2 best counter which is…

Ok I lied. There is one thing in between the 2 best Tyranitars above and thats a Mewtwo with Shadow Ball. Remember how I said Shadow Ball is the best move in the game? And its great against psychic? Guess what Mewtwo is? A psychic pokemon! So use your psychic pokemon against a psychic pokemon and you will do great! Umm wait a second what happens if the defending Mewtwo has shadow ball too? Well you will get your shadow balls off first and you are still only #3 but yes it will hurt. Use your Tyranitars instead if you have the choice

Baby Tyranitar puts in quite a showing against Mewtwo, reliably showing near the top of the counters list. Dark moves are what you are looking for although a fire quick move isn’t the end of the world. If you are swimming in quick tms like I am, swap that to dark/dark as there are better fire pokemon out there but this is the #2 dark pokemon

Lugia finally has a use! Focus Blast Mewtwo in particular is quite vulnerable to Lugia. You want Sky Attack for a special along with any quick attack and use it. Finally a reason to power up Lugia. Wait a minute scratch that. Save your power ups for Mewtwo. A much better psychic pokemon. Leave Lugia alone until defense actually matters

It’s been a long time since Snorlax showed up in any charts. Hes a very tanky option, and deals a lot of damage before he dies thanks to that excellent Lick Ghost move. Don’t have lick? Keep Snorlax in a gym so it won’t be auto selected or TM him! Snorlax is particularly good against Shadowball Mewtwo but does reasonably well against all of them

Scizor is the best bug attack user and has no issues vs. hyper beam and does ok against all forms of Mewtwo except focus blast.

Good old dragonite with Outrage is a good general counter and you probably have a high level one to use which is even better. Its no Tyranitar but still makes the list of good counters

Gyarados with double dark move is of course going to do quite good damage. It is particularly good against focus blast so keep that in mind if you have a high level one from back when high cp defenders were a thing

Pinsir does particularly good against Shadow Ball Mewtwo if he can survive long enough to get off his specials. I wouldnt power him up but if you have a decent one and are hurting for a slot, you can put him in

I struggled hard on this one. I really wanted to keep Blissey off the chart. Its a very particular situation against Shadowball Mewtwo and you have to have pound/hyper beam. Blissey will stay alive forever(almost 70 seconds!). And will do only 10% less damage than Tyranitar and 2% less than Snorlax. Next best is Umbreon who is so far behind its not even funny.

Gengar is a very special case glass cannon who you only want to use if you are in a hurry (or very short on people). It is theoretically possible to duo a Psycho Cut/Focus Blast Mewtwo with Gengar with a bit of luck if you each have 12 of them. Its going to be quite difficult though. There is one other funny thing about Gengar in this situation. If Gengar can survive 3 Confusions, Gengar will do a large amount of damage. If 3 Confusions kills Gengar, Gengar will be absolutely terrible. This means you need to have a high enough level, defense and stamina combination to survive 3 confusions. This means you need to be level 32, with 15 defense and 15 stamina or level 37 with 10 defense and 10 stamina to survive long enough. The exact breakpoint will depend upon your exact situation, I will update this article with the breakpoint later.