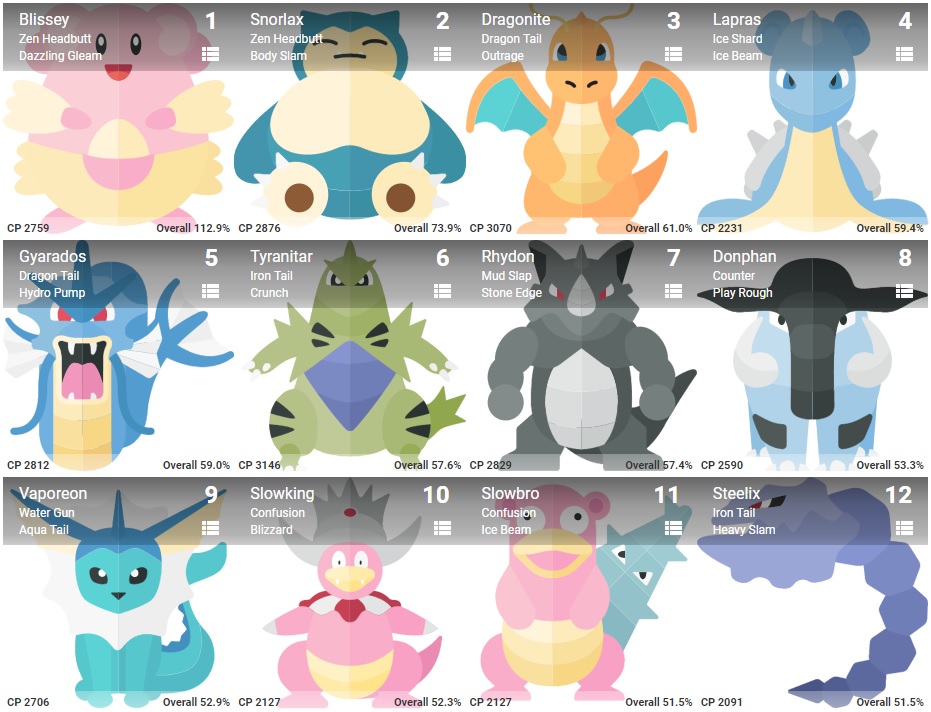 Major shifts in the rankings for defenders are coming soon to Pokebattler!  Recently two new features were added to the battle simulator for Pokebattler that dramatically increases the accuracy of simulations.  The first is the addition of dodge strategies to the simulator. This tries to more accurately portray what actually happens in the real world. Perfect dodging is a goal, a best case scenario. Through a combination of lag, mistakes and bugs, everyone gets hit by specials now and then.  The second is Monte Carlo simulations, which give a much more accurate simulation of situations where random chance is a factor.

The realistic dodging strategy is the most advanced dodging strategy currently on Pokebattler. It assumes you can dodge a move with a 1s delay in damage 50% of the time, while a 3s delay you can dodge 90% of the time. On top of that, it adds a 25% penalty to your special move dodging if you are either super effective or not effective since you have no text warning you that a special move is coming! This means moves like Hydro Pump and Stone Edge, which deal damage very early, are dodged must less frequently than slow moves like Hyper Beam. In addition, low defense champions like Machamp are not as good as they seem to be under the older simulator. See the bottom of this page for a full list of special moves dodgability.

Monte Carlo simulations are a standard way to handle highly randomized results. In Pokemon Go, there are many random things going on during gym combat. For starters, defenders have a random delay between attacks that varies between 1.5 seconds and 2.5 seconds. In addition, dodge strategies like realistic dodging above are full of decisions about whether to dodge or not. Aggressive strategies like Dodge Specials Pro will sometimes be unable to dodge due to their own special use. In the upcoming Gym overhaul, I expect status effects like Sleep to be added to the game which will likely have a random chance to them as well. Monte Carlo simulations handle this randomness by running a random simulation over and over again to achieve a stable result.  After running a various number of simulations, 100 simulations was chosen as a fairly accurate, but not too costly, method for generating Monte Carlo simulations for Pokebattler.

Defender rankings are expected to show the largest differences in these results and early results do not disappoint. The following analysis compares Perfect Dodging, Expected results to the new Monte Carlo Realistic Dodging simulations. Both rankings use level 30 Pokemon and the Dodge Specials Pro strategy which basically means you spam your attacks as fast as you can but dodge the special attacks. These rankings are only against the worst 5 matchups for each defender. Note that all percents mentioned below are absolute percents for Overall, not relative. This means a 5% difference likely means that the actual defender may be 10% better.

Blissey retains her #1 spot but Zen Headbutt/Dazzling Gleam has moved from just 2% behind Zen Headbutt/ Hyper Beam to a comfortable 12% ahead. In addition, Blissey now wins 3 of the 5 matchups, showing just how powerful she is in realistic siutations. Unsurprisingly, Pound Dazzling Gleam moved up the list quite a bit to only 3% behind the best moveset, also winning 3 matchups. Time to win is sitting at just over 72 seconds. All in all, she’s a complete and utter beast of a defender and well deserving of her defender crown. Dazzling Gleam is at 72% chance to dodge for most Pokemon with realistic dodging but for Machamp and others with fight moves, the 25% penalty drops it down to 54% chance to dodge. Hyper Beam is sitting at 90% to dodge (68% for fighting moves), far less likely to hit you in the real world. Just to emphasize how good Blissey is, the worst Blissey moveset is 20 points ahead of the best Snorlax moveset.

The best Gen 1 defender retains his #2 position, with Zen Headbutt/Body Slam being his best defensive moveset, and Hyper Beam a good 5% behind. Heavy Slam is not too much worse, only 2% behind. Hyper Beam is one of the slowest moves in the game, and the 90% dodge rate from this strategy vs 54% for Body Slam really hurts it in the rankings. The rest of his moves are very good as well with the exception of Lick/Hyper beam and Lick/Earthquake which are both just good.

Dragonite also keeps his #3 position, with a very slight reshuffling of Outrage vs. Hurricane, less than 1% separating them. This result is a bit surprising due to Hurricane being a faster move than Outrage, but this is likely due to only including the top 5, with Cloyster and Tyranitar swapping places between the 2 rankings. There is also the Dragonite vs. Dragonite matchup. The Steel Wing and Dragon Breath versions of Hyper Beam are Twister quality. Edit: After some investigation, it comes down to wether the lower dps 2 bar move gets used enough to make up for the lower dps. 2 Outrage > 1 Hurricane but 1 Hurricane > 1 Outrage.

Things start shaking up a bit with Lapras moving up from #9 to #4. Lapras has always been a top tier defender, even post nerf, and the double ice moves are in a statistical dead heat for #1. Both Ice Shard and Frost Breath along with Ice Beam are about 3% ahead of Frost Breath/Hydro Pump. Ice Shard/Blizzard and Water Gun/Ice Beam are only a couple percent behind that. A very strong defender that will likely see play again after the Gym combat overhaul.

Gyarados has a love/hate relationship with those of us in the simulator community. Mostly chosen for its high cp, the new Gyarados’ with Dragon Tail are all good defenders with Dragon Tail/Hydro Pump around 6% ahead of Crunch and Outrage. The other moves fall off dramatically. For those who somehow think Twister is some great move, it’s way down at 41.7% due to its abysmal damage putting it behind #24 Cloyster in the rankings. Yes it’s that bad. Hydro Pump is a huge move damage wise and comes out extremely quickly, giving it a 50% dodge rate, and a 37.5% dodge rate if you are using super effective moves against it! There is a reason Jolteon gets demolished more often than you would think unless you are playing extremely safely near the end of the fight, because Hydro Pump is insanely fast.

Tyranitar keeps his #6 position with a slight move by Iron Tail/Crunch to pass Iron Tail/Stone Edge by 2%. Looking into the details, this is due to Steelix dropping from #5 to #17 from the top 5 counters and being replaced with the much slower but tankier Blissey. Iron Tail/Fire Blast and Bite/Crunch are a good 9% behind with the remaining Bite moves being down there with Twister.

Rhydon slips from #4 to #7 and the much faster Stone Edge beats out the super slow Earthquake and Megahorn by 6%. Rock Smash movesets are still better than Twister.

Another big move, Donphan rises from #15 all the way up to #8 qith the fast and powerful Play Rough along with the slow quick move Counter. Heavy Slam is a good 4% behind with Earthquake another 3% behind that. Tackle is way too fast a quick move as the rest of his defender movesets are Twister quality or worse.

A big move for Vaporeon moving up from #21 all the way to #9 on the strength of the fast special moves. Aqua Tail is a good 3% ahead of Hydro Pump and 5% ahead of Water Pulse. Time to win is a strong 30.7s which you may want to consider if you think the only thing that matters is wasting attackers time.

Slowbro, like his sibling Slowking, has 3 good movesets with Confusion, with Ice Beam being 2% ahead of Psychic and 3% ahead of Water Pulse. Once again Water Gun moves are complete garbage Prestige Bait. Edit: I got a question asking why Slowbro with Ice Beam ends up being worse than Slowking with Blizzard but that is not true with Lapras. Once again this is a 2 bar move vs. 1 bar move problem. Both Scizzor and Jolteon can kill Slowbro before he can get off the 2nd Ice Beam, but Slowking gets off his Blizzard just in time.

Lets be honest, you are never going to see Steelix in a gym but I just made one so I decided to go to top 12 instead of top 10. All his movesets are equally good for gym defense, less than 3% separating them. Heavy Slam is a bit better than the other two and Iron Tail a bit better than Dragon Tail due to typing but it’s a wash.

The upcoming update for Pokebattler will have these rankings and more all built in. There were 560,000 rankings performed, each between 500,000 and 23,000,000 individual battle simulations each. It takes 18 hours of straight processing on my high powered desktop machine to generate these rankings and significant architecture changes were made so you would not need to wait 2 minutes for each result. I made many optimizations that will have the side benefit of speeding up the site overall. The end product is a faster, more accurate ranking that should have a setting that will make everyone happy… except those looking to sort by CP, I still haven’t added that ;). I hope you all enjoy this article and stay tuned for the next major update for Pokebattler.