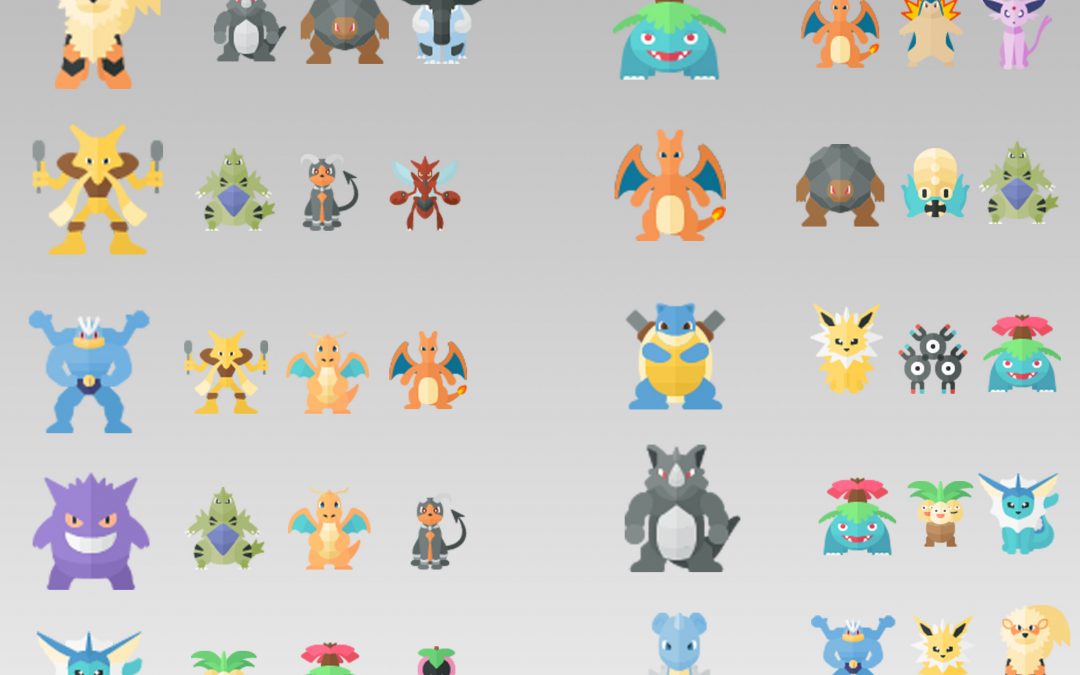 Pokemon Go Raids are here and Pokebattler has been busy researching exactly how everything works. This is an extremely time consuming process with multiple hours spent analyzing video footage. The video footage has bugs, jumping HP bars, large lag spikes and more, that make determining exactly what’s going on almost impossible. That said, we have made significant strides in improving the accuracy of our simulations.

There are not that many solo-able raids, or raids you can beat by yourself, out there currently, although I expect this to go up over time. I’d guess there will be occasional rotations just like Niantic does with eggs. These raids are fairly easy, with all raids being on the easy side for anyone currently able to access the raids at level 24 and above.

Group raids generally require 2 people for the level 3 raids and 5  people with really strong Pokemons for the level 4 raids. 6 or 7 level 30 players is far safer.

Below is the best counters for the most difficult set. Note that the order is not exactly the same order shown on Pokebattler, as I tended to trim out Pokemon that died far more than the rest and ones that took too much time.

After analyzing videos to make spreadsheets like this one, and using quite a bit of twiddling in the code, an approximation was created based on solo-able raids. The level of the boss has been set to level 80 with bonus attack and defense of 15. The bonus stamina for the boss has been set based on the raid tier.

This formula is absolutely not correct. This is only an approximation. It will most likely be weeks before we get an accurate formula.

Many assumptions were made while tweaking these numbers. I would love for help from the community on improving these formulas, so I will share all of my thought processes and how I came up with the current formula.

Per the spreadsheet above, the combat time and incoming damage for the 3 Pokemon I used to kill Muk was quite useful. Turns out Alakazam getting killed quickly by 4 Poison Jabs and 1 huge Gunk Shot is quite useful to know. Tyranitar and Golem both were taking very small amounts of damage and had a very exact number of incoming attacks that killed them. Matching the 3 incoming damage rates, 1 fast, 1 medium, 1 slow helped narrow down what the incoming damage rate was.

Assumptions are Okay! (At least for now)

Why, might you ask, if the formula is not correct and I’m making a bunch of assumptions am I comfortable making raid counters?  First off, these are the most accurate raid simulations currently available. To not make these imperfect simulations available would be a bigger issue. These numbers are far more accurate than my previous ones and I’m sure as more data rolls in, the community will figure out the exact formulas.

More importantly, since we know incoming damage rates, and we can deduce outgoing damage rates and we know combat time, we can absolutely generate fairly accurate orderings of attackers! They do not have to be 100% accurate. They need to give a general idea of just how many times each Pokemon dies and how well they do. In this they have succeeded

We need the correct formulas! Collecting this data is extremely time consuming. I hope the spreadsheet I gave helped make sense. We need similar spreadsheets for every single boss fight.  On top of that, raid fights will require collecting from all parties! I need people to record all 6-7 people and painstakingly count incoming and outgoing attacks and dodges along with all the levels and IVs of the attackers.

Finally, I have major UI work I need to perform on the site as this was jammed together and is a bit buggy. So as you can see, this is a work in progress. But it should give you a good baseline for these beginning days of raids, and we will continue to work hard perfecting this tool for the future.

As I was about to post this article, there was a very interesting finding by /u/ClamusChowderus on reddit. The formula for deriving CP has been found! Unfortunately the formula causes the incoming attack damage to be far too high for it to be the real formula and worse the stamina is insanely too high for the actual experience. I expect there will be quite a bit of research going on today, but I decided to post this article as is.

Based on what I know right now, I have the following hypothesis:

We will see if this shakes anything up

Infographic was made with level 30 attackers vs. the most difficult boss moveset. Snarl / Wild Charge Arcanine for example shuts down all the water attackers. That’s why you want to use ground attackers and ground moves.

You can look in far more details in the raid tool. It will be much easier to use soon!