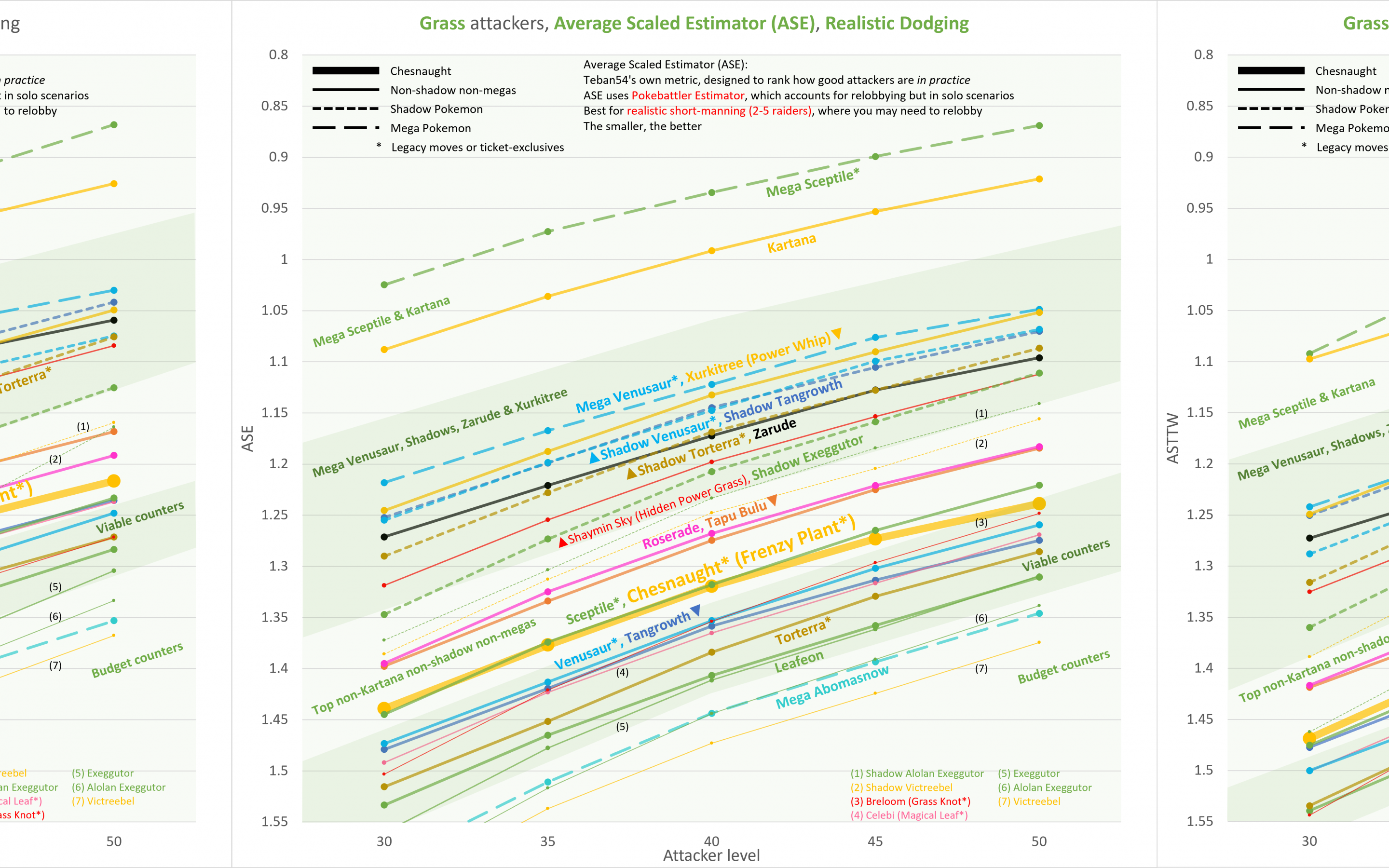 This CD is mostly for new players who missed Kartana raids and don’t have enough Roserade, and Unique 6 non-shadow users.

The Gen 6 starters are finally getting their long-awaited Community Days! Chespin CD will be held on Saturday, January 7, from 2pm-5pm local time (raiding and CD move evolution window until 10pm). Any Chesnaught evolved between 2-10pm will know the CD move Frenzy Plant.

While players are understandably hyped about the first starter CD in 16 months, getting the 6th Frenzy Plant user surely feels way less exciting than the 1st. And from a raiding perspective, FP Chesnaught arrived perhaps a bit too late: Just in the past year, we had Tapu Bulu, Shaymin Sky, Kartana and Mega Sceptile, the latter two blowing all other grasses out of water.

How useful is Chesnaught as a grass attacker today? Does it still have relevance, or has it been too outclassed?

“Quick analysis” is a series I’m experimenting for highlighting relatively unimportant additions to raid counters. Occasionally, I may also do it for Pokemon that are not new but worth mentioning, when they’re featured during events.

The primary reason is to save time. This article, which primarily consists of a grass-type plot with Chesnaught highlighted, “only” took me 2 hours to write. On the other hand, doing a full analysis – generating new simulations, doing a detailed comparison of Chesnaught vs other attackers (e.g. Sceptile), possibly doing inter-type comparisons, mentioning all future attackers, etc, can easily take 8+ hours spread across multiple days. Things like Chesnaught are simply not worth this level of effort, especially when I have other analysis projects to do.

Feel free to suggest a better name for the series!

See Appendix 1 (at the end of this article) for technical details and how to read the charts. The Chandelure analysis also contains explanations on ASE vs ASTTW.

Compared to other non-legendaries, Chesnaught is quite bulky. It has almost identical bulk as Tangrowth, and about 45% more bulk than Roserade and Sceptile.

If you have enough Kartana powered up, even just a little bit, you can forget Chesnaught exists.

Even if you ignore Kartana and other legendaries, Roserade is also a great option that’s better than Chesnaught. If you have a Roserade team, Chesnaught isn’t worth building all over again.

While Sceptile and Venusaur (with Frenzy Plant) are both slightly worse than Chesnaught, they both have mega evolutions while Chesnaught doesn’t. So even for a budget team, you may still find investing in a mega-evolvable grass attacker more desirable.

In the future, Rillaboom (Gen 8 starter) will completely outclass all earlier grass starters and non-legendaries, when it gets Frenzy Plant in like 2027. (More info in my Kartana analysis.)

This CD is mostly for new players who missed Kartana raids and don’t have enough Roserade.

If this applies to you, congratulations, you can now get a budget grass team for free! This is especially useful if you’re lacking counters for the upcoming Primal Kyogre raid in February.

For anyone who has any sort of a grass team… This CD is skippable.

Why this CD arrived too late

A bit of personal opinion.

It’s completely understandable that Niantic needs to control the speed of content release, and not rush through 7 generations of starter CDs immediately. Still, a Chespin-like CD in 2021 would have had much greater fanfare than in 2023. (Chespin itself was only released in December 2020, so this is just a what-if scenario.)

Chesnaught wouldn’t have been a transformative addition even back then, but it would have provided a great option that’s not far from the best (Roserade and shadows).

This is not blaming Niantic or anyone… It’s just the inevitable result of power creep. The cost of being excited about Kartana is that every other grass type is extremely underwhelming now.

Articles coming up next

When my IRL schedule permits, I plan to analyze the following:

Appendix 1: Guide on how to read the charts & Technical details

Don’t know how to read the charts?

If you’re totally lost, just look at the first two plots, or just the first one if you don’t dodge in raids. These two plots are based on my Average Scaled Estimator (ASE) metric, which approximates in-raid performance using Pokebattler Estimator, best suited for realistic shortmanning (2-5 raiders).

The Average Scaled Time to Win (ASTTW) plots are similar, but best suited for medium or large lobbies (6+ raiders). This metric assumes no relobbying (i.e. reentering the raid after all Pokemon fainted).

The ER (aka DPS3*TDO scaled) and DPS plots are for experienced players who want to check these metrics.

In all six plots, the higher, the better. Example: Kartana is generally better than Zarude, which is better than Roserade, if they’re all at the same Pokémon level. But everything listed is perfectly usable and will let you pull your weight in raids.

You can also compare different attackers at different levels: points on the same horizontal line mean they’re equally as good. Example: Looking at the “ASE no dodging” plot, A Level 30 Zarude performs similarly to Level 40 Shadow Exeggutor and Level 50 Chesnaught.

Reminder: All plots show average performance against many raid bosses. Against a specific raid boss, the rankings can be different.

Appendix 2: Past analyses on other types

If multiple articles are listed for the same type, they’re sorted from most to least recent. Not all articles are included: the ones here typically have sections not covered in the most recent articles.