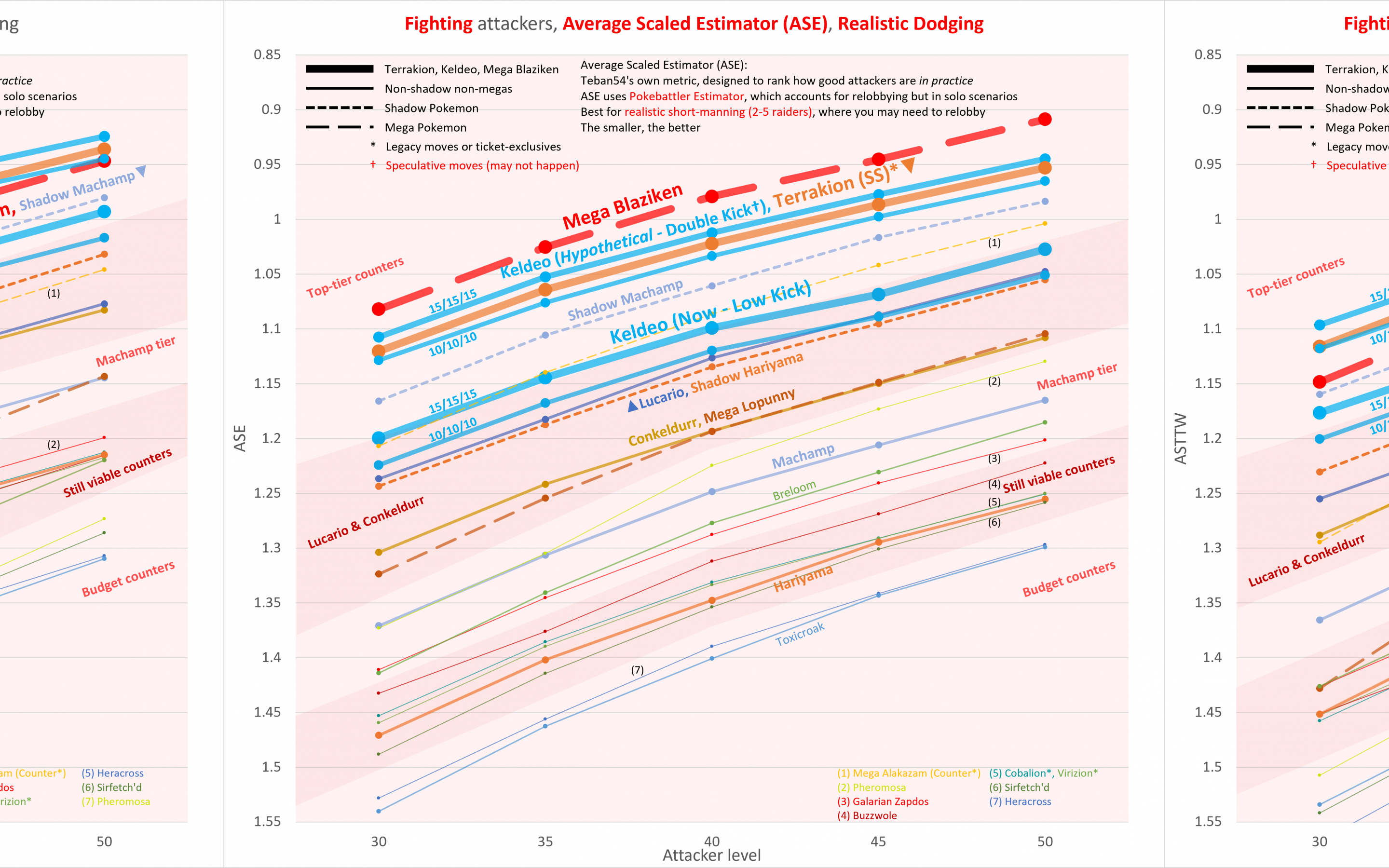 Terrakion is a beast, get it from raids now. Best fighting type, better than Shadow Machamp, Lucario and all others. Also a good rock type if you lack Rampardos and Rhyperior.

Keldeo: A great attacker, but not worth the $8 ticket.

As part of the ongoing Mythic Blade event:

Terrakion went from zero to hero as a raid attacker since September 2022, when it received Double Kick (TM-able). The fighting-type fast move immediately made it the best fighting attacker at the time, surpassing Shadow Machamp, as I discussed back then.

With the same stats as Terrakion but different moves and typing, will Keldeo enjoy the same level of success in raids? That’s the question I’ll address today.

A third Pokemon under the spotlight today is Mega Blaziken, which was introduced during the Hoenn mega raid day last week. It’s already a top-tier fire attacker, as I wrote two days ago. But less well-known is that Mega Blaziken also excels as a fighting type! Stay tuned.

How to get a Keldeo? Do I need to buy a ticket?

For those who aren’t familiar with how these usually work:

Both Keldeo and Terrakion also have an overpowered (OP) signature move, Sacred Sword. Even if you don’t know how OP it is, you probably know how OP Frenzy Plant is. Yes, they’re quite similar in strength! Combining top-tier attack stats and an OP move, you get an OP attacker in Terrakion that even dethrones a shadow.

That’s where the similarities end. And the first difference is one that really hurts Keldeo: the fast moves.

Thankfully, the other difference works in Keldeo’s favor: typing.

That’s 2 wins for Keldeo and 1 for Terrakion. In addition, normal-type raid bosses and moves are rare, whereas ice and steel are more likely what you would be fighting against in practice.

In addition, Terrakion is also weak to Fighting and Ground. Several fighting-weak bosses happen to have these moves: Think Focus Blast Darkrai and Regis, Earthquake Regice, and Cobalion and Terrakion (the boss) with fighting moves and Earthquake.

So when we combine these differences and put both Terrakion and Keldeo against all (challenging) raids – T5, UB, Mega, T3 – how do they compare?

For individual charts, or if you’re having trouble viewing the images, here’s an imgur link.

See Appendix 1 (at the end of this article) for technical details and how to read the charts. The Chandelure analysis also contains explanations on ASE vs ASTTW.

I have to reiterate because I really don’t want people to miss out.

Terrakion (Double Kick/Sacred Sword) is the best non-mega fighting attacker, being slightly better than Shadow Machamp (by 3-6%, or ~5 Pokemon levels), significantly better than Lucario and Conkeldurr (by 10-15%), and everything you can think of.

Keldeo and the struggle with fast moves

As I said earlier, Keldeo doesn’t have the ideal fast move Double Kick yet, and instead has to work with the inferior Low Kick. This drops its DPS to below Lucario and Shadow Hariyama, away from Terrakion and Shadow Machamp.

As a result, in terms of raid performance, Low Kick/Sacred Sword Keldeo becomes similar to Shadow Machamp (slower but bulkier), and 5-7% below Terrakion.

But what if Keldeo gets Double Kick one day, just like the other Swords of Justice had? Double Kick Keldeo has the exact same stats and moves as Terrakion, resulting in same DPS and ER values, with the only difference being in typing.

And the typing advantage does show up! When averaged across all raid bosses, a 15/15/15 Double Kick Keldeo does perform better than Terrakion on average… But very slightly.

This also means the comparison depends highly on Pokemon level and IVs. A few power-ups will make Terrakion superior on average, and so are better IVs (especially attack IV). More on IVs later.

Let’s do a detailed breakdown by raid bosses and their movesets. Suppose you’re lucky to have a 15/15/15 Keldeo, powered it up to level 40, and want to compare it against a 15/15/15 Terrakion.

Because they’re so similar, in neutral scenarios the difference is often smaller than 1%. Therefore, we only consider when one is >1% better than another. Also, we only consider T5/UB and Mega raid bosses, as T3 raids can be easily beaten by both.

The percentages in each line don’t add up to 100%. The rest are when both are equal (<1% difference).

TL;DR: 45% of the time there’s no difference, but when there is a difference, it usually helps Keldeo, and most of the relevant T5/Mega bosses have such movesets (e.g. Focus Blast Darkrai). Keldeo also has a greater advantage in these cases.

For more than half of the T5 and Mega raid bosses, the boss has movesets that hurt Terrakion more than Keldeo on average. (Example: Focus Blast on Darkrai and Regis.) In these specific movesets, Keldeo does ~7.6% better than Terrakion.

Terrakion does have its own advantageous boss movesets, but they happen less often. In these movesets, Terrakion only does ~3.7% better than Keldeo.

So if you enter any fighting-weak T5 or Mega raid:

Currently, we can only get one Keldeo encounter from the paid research. While it has a 10/10/10 IV floor, that’s obviously worse than IV hunting in (several) raids.

This is a very small and insignificant difference that won’t be moving Keldeo down a whole tier. Even though technically it’s enough to flip a few rankings:

(For those interested in the importance of 3 IVs: See this tweet for preliminary results. Attack is the most important, but not everything. I think it’s like “1 attack IV = 2-3 defense+HP IV combined”).

Summary & Verdict: Is the Keldeo ticket worth it?

Even ignoring the $8 cost and associated P2W concerns, I’ll say: Not really.

Now factor in the $8 and it should be a no-brainer. That’s enough to do at least 8 Terrakion raids, which will probably net you a 15 attack Terrakion. Not worth spending them on a single Keldeo with random IVs just to avoid being hit by Focus Blast Darkrai and others.

The only case in which I can see the $8 being worthwhile is if you’re really into “Unique 6” teams and challenges, and want them right now.

Blaziken is better known in the raiding scene as a fire attacker, especially as a mega. But did you forget that Blaziken also has a double fighting moveset?

Counter/Focus Blast is not ideal, but it’s sufficient. With this moveset, Mega Blaziken becomes the best currently released fighting-type mega, outclassing Mega Lopunny by a mile in raw power. Even a Level 50 Mega Lopunny is only as good as a Level 30-35 Mega Blaziken.

Mega Blaziken even makes a run at becoming the best fighting attacker, period, but it requires dodging to do that. ASE with dodging does makes it surpass both Terrakion and DK Keldeo. This is both because of Blaziken’s glassiness and Focus Blast being a 1-bar move.

Without dodging, it falls between Terrakion and Shadow Machamp – still very good, even though not #1.

Given Mega Blaziken’s excellence in both fire and fighting types, it’s a perfect candidate for unlocking a second move. Especially when it only costs 10k stardust!

As we get more megas, Blaziken will eventually be outclassed by Mega Lucario, Mega Heracross and Mega Mewtwo X. All three seem like faraway candidates though, so your Mega Blaziken may stay as the top mega for longer than you might expect!

A word on Aura Sphere Blaziken

There’s actually a legitimate reason to consider saving your Torchic unevolved for this possibility. Aura Sphere is a legal move for Blaziken in the MSG. IF it ever comes to Go – and that’s a BIG IF there – Aura Sphere Blaziken will be a monster.

The big question is how likely that would happen. Niantic seems to be keeping Aura Sphere exclusive to Lucario (despite its wider distribution in Gen 8 MSG). Another Blaziken raid day with Aura Sphere in a few years when contents run out won’t surprise me, but I wouldn’t bet on it.

Articles coming up next

When my IRL schedule permits, I plan to analyze the following:

Appendix 1: Guide on how to read the charts & Technical details

Don’t know how to read the charts?

If you’re totally lost, just look at the first two plots, or just the first one if you don’t dodge in raids. These two plots are based on my Average Scaled Estimator (ASE) metric, which approximates in-raid performance using Pokebattler Estimator, best suited for realistic shortmanning (2-5 raiders).

The Average Scaled Time to Win (ASTTW) plots are similar, but best suited for medium or large lobbies (6+ raiders). This metric assumes no relobbying (i.e. reentering the raid after all Pokemon fainted).

The ER (aka DPS3*TDO scaled) and DPS plots are for experienced players who want to check these metrics.

In all six plots, the higher, the better. Example: Terrakion is generally better than Shadow Machamp, which is better than Lucario, if they’re all at the same Pokémon level. But everything listed is perfectly usable and will let you pull your weight in raids.

You can also compare different attackers at different levels: points on the same horizontal line mean they’re equally as good. Example: Looking at the “ASE no dodging” plot, A Level 35 Terrakion performs similarly to Level 40 Shadow Machamp and Level 50 Lucario.

Reminder: All plots show average performance against many raid bosses. Against a specific raid boss, the rankings can be different.

Appendix 2: Past analyses on other types