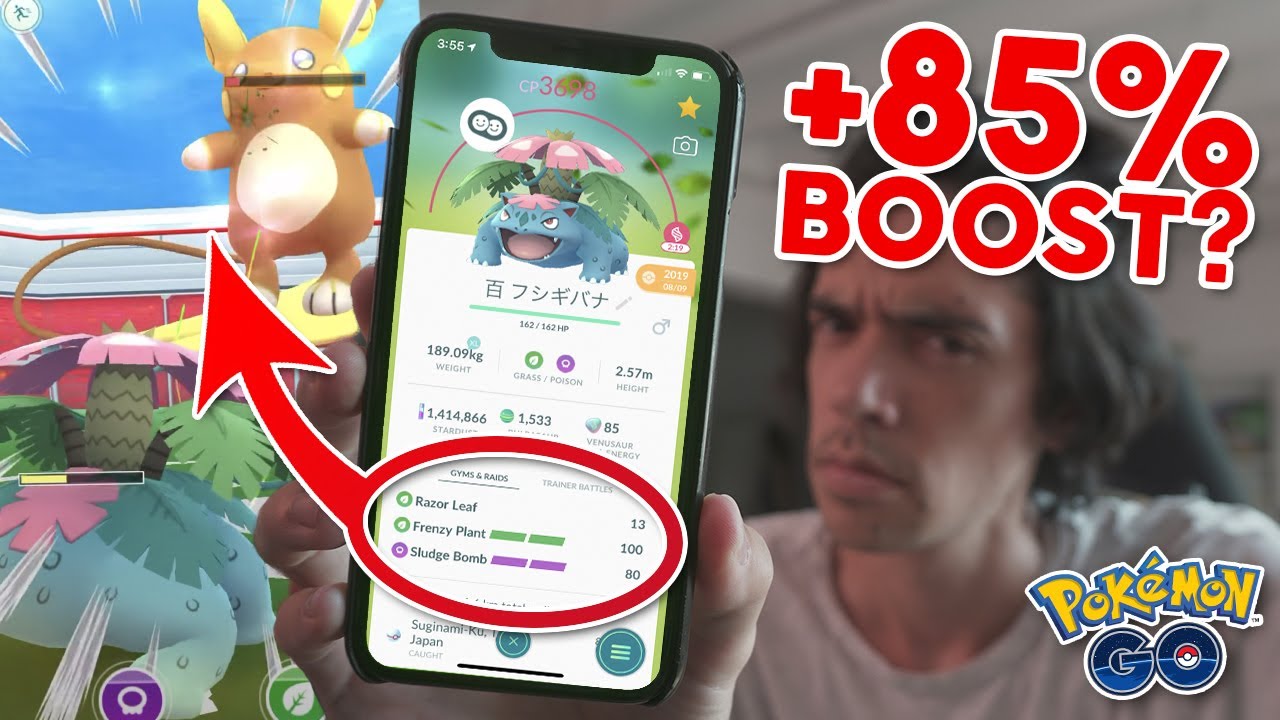 This article is no longer the best information about mega Pokemon.  Please see the Pokemon Go Mega Boost Update

Mega Pokemon have come to Mega Pokemon Go with quite some controversy. We here at Pokebattler have stayed out of the conversation regarding what the appropriate cost for Megas should be and if they should be limited use or not. We do not believe it is possible to make that decision until the research has been done to say how Megas actually work!

From Niantic, “Mega Pokemon are intended to give you a 1.3x Mega Boost for using the same type of move as the Mega Pokemon itself and 1.1x Mega Boost otherwise.” Pokebattler set out to research this with the help from some kind people on the PogoRaids Discord. Almost all of the numbers matched a straight 1.3x boost on top of the existing weather boost, friend boost, shadow boost, STAB boost and type advantage boosts.  This boost exists as long as the Mega is alive.

There was one particular video that didn’t make any sense. Mega Venusaur destroying Alola Raichu in just 80 seconds. We attributed it to some transient error and updated the website with all the findings.

But this was not a transient error.

More examples started coming in of people beating the simulations by crazy numbers. A crack research team was assembled and there is a massive bug with the way dual moves work!

Our current understanding of the way Mega Boosts work at this time based on current research:

Is This a Bug? (Insert Beedrill Joke Here)

We here at Pokebattler assume the huge mega boost is a bug, but there is a chance it may not be! Perhaps they are testing out the effects of having remote raiders do less damage. In that case, a dual move Mega Pokemon is the single biggest DPS available and should be invested in immediately. Not only does it provide a 30% boost to other Pokemon in the raid, it also provides itself a 85.9% boost in damage! These Pokemon with their high stats and signature moves were already taking all the top slots in the raid rankings, and this would make the mega inflation even more pronounced.

So of course it’s a bug. They will fix it. Are Megas still justified in being a temporary effect? Mudflation is a concept that has been around for years meaning that as a game goes on in years everything becomes more powerful and older things are worth less. Megas are a very dangerous step in this direction. You can’t just create a new class of characters, give them an enormous 30% party buff effect and have them be around 100% of the time. If they are to be around for every raid, the effect should be reduced to perhaps 10%.  As it is right now without the bug, if 3 players are close to beating a raid, use 3 Megas and do some minimal dodging and coordination, they will do the damage of 4 players. This makes some raids go from not-winnable to winnable which is a good thing for the game… in small doses.

Niantic has already significantly reduced the cost of Megas and dramatically increased the mega energy accumulation rate. We do expect Niantic to continue to add additional ways to create mega energy and placate the justified concerns of the community.  We here at Pokebattler are divided. On the one hand at its current power level, Megas may be too strong to be need to be 100% available for game balance reasons in our opinion. We also like the idea of breaking out the Megas only on special occasions that really warrant it. On the other hand, the built-in limit of only 1 mega per player may be enough to prevent this from being a problem.

The Pokebattler preferred balance change is to only apply the 30% buff if you use the mega energy but the mega stats would be permanent!

We expect in the end, Megas will be rather easy to get, a lot of people will max out on Mega energy and you could use them most raids but you might not have the right Mega to give a 30% boost. 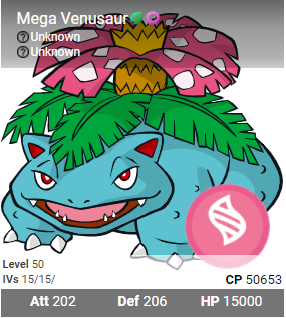 Venusaur with these moves 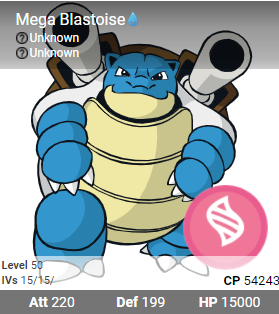 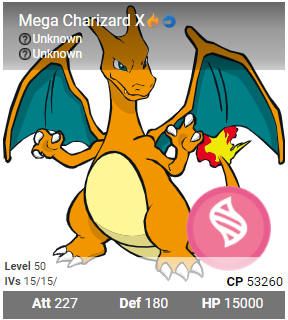 Charizard X with these moves 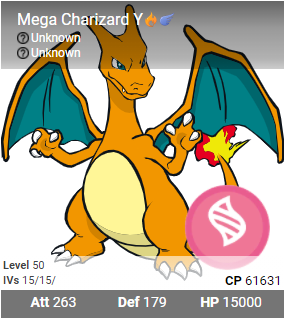 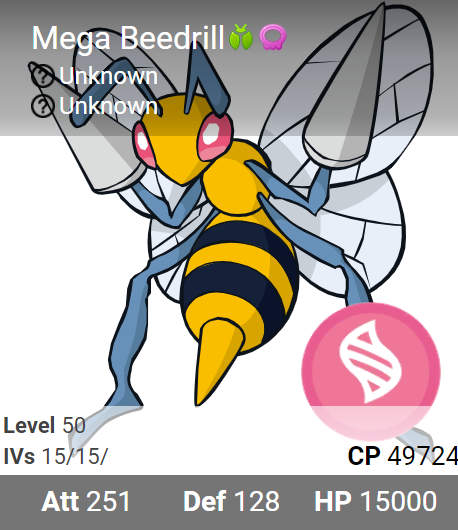 Beedrill with these moves

16 different raids were performed and painstakingly analyzed. The mega boost bug has been reproduced on multiple different raids on separate days. It is not always reproducable and we can not determine exactly what is going on.

See the full spreadsheet for all the gory details

Our first example is a straight forward 30% mega boost.  It takes 77 Razor Leafs doing 47 damage each for a level 41 Mega Venusaur with 10/10/10 IVs to defeat the Rhydon.

Our second example shows that a second attacker gets a  30% mega boost only as long as the mega is in the raid.  It takes 66 30% boosted Razor Leafs and 86 non boosted razor leafs to defeat the Onix.

Our third example shows that a second attacker gets a 10% mega boost without matching attack types.  It takes 28 10% boosted Psycho Cuts to defeat the Timurr.

Our fourth example shows that a level 41 best budied Mega Venusaur gets a whopping 86.9% mega boost with dual charge moves and all matching attack types.  It takes 81 86.9% boosted Vine Whips and 11 86.9% boosted Frenzy Plant to defeat the Alola Raichu.

Our fifth example confirms that a level 41 best budied Mega Venusaur gets a 86.9% mega boost with dual charge moves and all matching attack types.  It takes 77 86.9% boosted Razor Leafs to defeat the Onix.

Our final example tests a local Mega Venusaur with Vine Whip, Frenzy Plant and Sludge bomb. Astute observers will notice this is the same Mega as before but does not have the level 41 best budy applied. It takes 159 85.9% boosted Vine Whips and 14 85.9% boosted Frenzy Plants to reduce an Alola Exeggutor to half life.

Whether these bugs remain for any length of time, or Niantic decides to fix them in the very near future remains to be seen. In the meantime, if you happen to be able to take advantage of this bug, it may make for some pretty entertaining videos of you pulverizing your opponent. We expect the Pogoraids discord to be adding a asterisk next to all the records made until this is patched for steroid abuse! Pokebattler will NOT be adding this bug into the simulations unless of course its not a bug. For the latest research and updates on Pokemon Go Mega Evolutions analysis, keep checking back on Pokebattler.com

Thanks so much to Shiva, Olafbrows and CzystyBeton for their hard work and raid passes  This sort of research is long, slow and arduous but the result is appreciated by all!

More research will need to be done to narrow down this bug but best of luck to those of you looking to replicate these numbers! Shiva has made a useful raid calculator for those wishing to dive in to the research.

PS. Due to popular demand Pokebattler Raids now has a mega toggle.