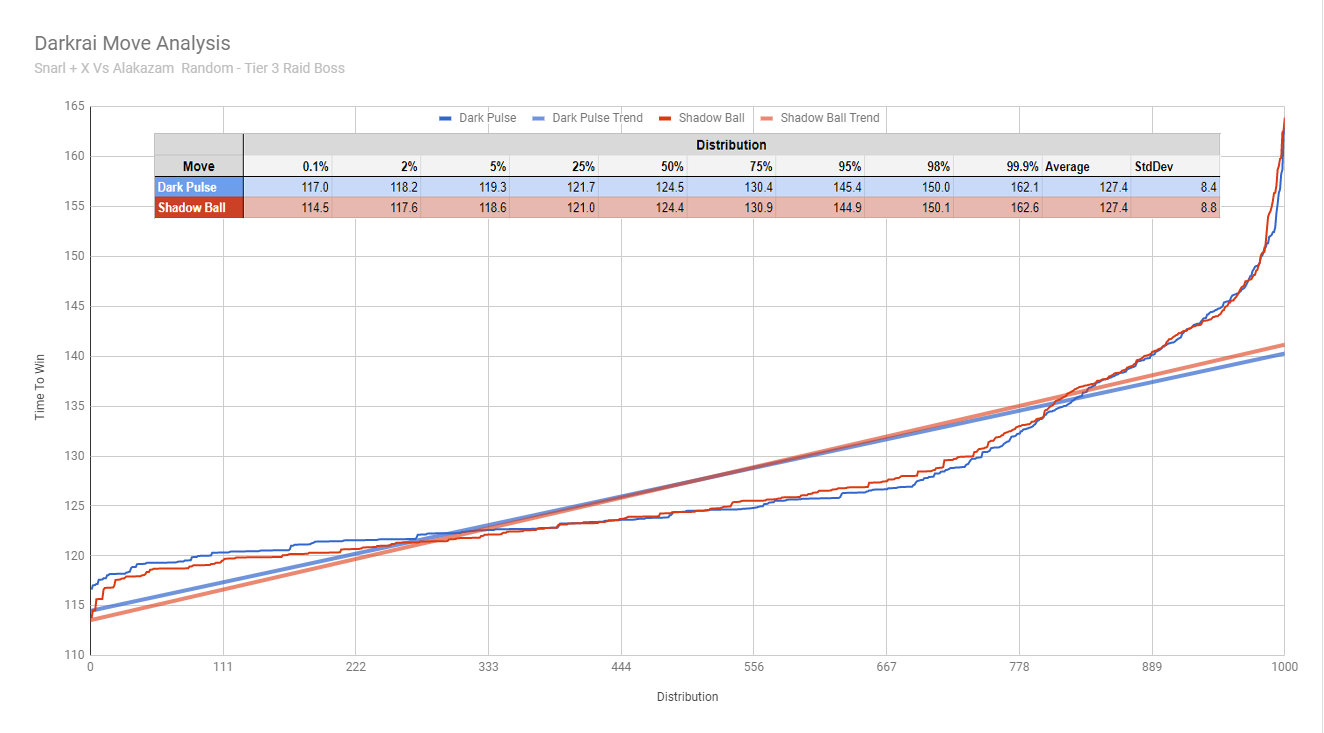 Darkrai has come to Pokemon Go Raids as a Tier 6 Boss. Darkrai is the #1 Dark type Pokemon in the game and has two viable special attacks, Dark Pulse and Shadow Ball. Over 300,000 sims were performed to analyze how these 2 moves perform in raids! Find out whether to use Dark Pulse or Shadow Ball on your Darkrai!

What special move do you want to use for Darkrai?  Darkrai is a dark Pokemon so normally you would want to go with double Dark moves for that same type attack bonus but in this case, Dark Pulse is not a very good move while Shadow Ball is an excellent move. DPS wise Shadow Ball should be 4% faster but there is a 1s advantage on when the damage actually hits the boss. This means sometimes Shadow Ball won’t actually land while Dark Pulse will. These two effects seem to offset each other almost perfectly in the simulations.  However the simulations only show an average of 200 raids which is obviously not enough in this case, there is way too much variation… So we decided to crank it up a notch and see what really is going on here!

First let’s use a modified Pokebattler spreadsheet which is available for Pokebattler subscribers.  We have simulated both Dark Pulse and Shadow Ball and have increased the number of sims from 200 up to 1000. We then sort by time to win and plot both the points and the linear regression.  The left side of the graph is the ‘lucky’ part of the graph showing raids where Darkrai did better than usual. The right side is the ‘unlucky’ showing those times when you did worse. The blue lines and data row show the results from Dark Pulse. The red lines and data row show the results from Shadow Ball.

First let’s look at the trend lines as it is the easiest to understand. Shadow ball starts better than Dark Pulse in the lucky situation, becomes even around the mid way point and then becomes worse as you become unlucky. This implies that Dark Pulse is more consistent but Shadow Ball has a chance of getting luckier.  Looking at the data table, you can see this confirmed with Shadow Ball typically faster in lower percentiles and worse in the higher percentiles with a higher standard deviation and variance. Looking at the raw data points, you can see that they actually track each other quite closely with a second or two advantage in the first 300 sims for Shadow Ball and a second or two advantage from 500 to 700 and again at 950-1000 for Dark Pulse.

Now the previous graph was analysis of all the moves Alakazam has. The actual analysis will vary by move in hard to predict ways. Here is a quick analysis of what happens versus the easiest Alakazam move Fire Punch. You can see on the left side of the graph that Shadow Ball has an advantage for the first 15% of the tries.  Then there is an advantage to Dark Pulse for 80% of the tries. Followed by a bunch of bad luck for both Dark Pulse and Shadow Ball that is worse for Dark Pulse.

I guess we need more sims.. Lets crank it up out of the realm of google sheets to 50,000 sims for each case with some back end modifications.

And there you have it. Shadow Ball and Dark Pulse are literally tied on time to win on average at 127.4s. The median time is 0.9s faster with Dark Pulse but the chance to Win,  Average power, TDO, Potions and Overall rating are slightly better for Shadow Ball.   One interesting effect is on the Median result shown, Dark Pulse did quite a bit better than Shadow Ball on the first mon. This is almost certainly just a random fluke in the simulations but who knows?

Now let’s look at Fire Punch again. Here we see the same result as in the google sheet. Dark Pulse is faster on average. All the other stats seem to be similar but the fact that Deaths to Win shows up means that there was at least 1 sim but less than 25 where Dark Pulse actually lost! That tiny part of the graph on the far right that showed Dark Pulse having some very bad luck occasionally seems to be real.  Interestingly again, Dark Pulse in slot 1 did quite a bit better than Shadow Ball. Maybe this is actually real. Feel free to get superstitious and run Dark Pulse in slot 1 and Shadow Ball in slot 2.

Now for the final slide. We finally find the source of the primary advantage Shadow Ball has over Dark Pulse in the Alakazam matchup.  Focus Blast is a single bar move which makes the damage window speed advantage happen less frequently than with a dual bar move. This on top of the higher variability of Shadow Ball adds up to winning without rejoining 5.5% of the time instead of 2.5% of the time. And that is without using any early join tricks!

Dark Pulse is more reliable, Shadow Ball lets you win some of those really tough matchups. In the vast majority of cases, they are indistinguishable and can be used interchangably. If you want to get really expensive, buy a second move! I suspect that using Shadow Ball when you are not close to death and Dark Pulse when you might get one shotted is the highest dps.

But forget all that fancy analysis..