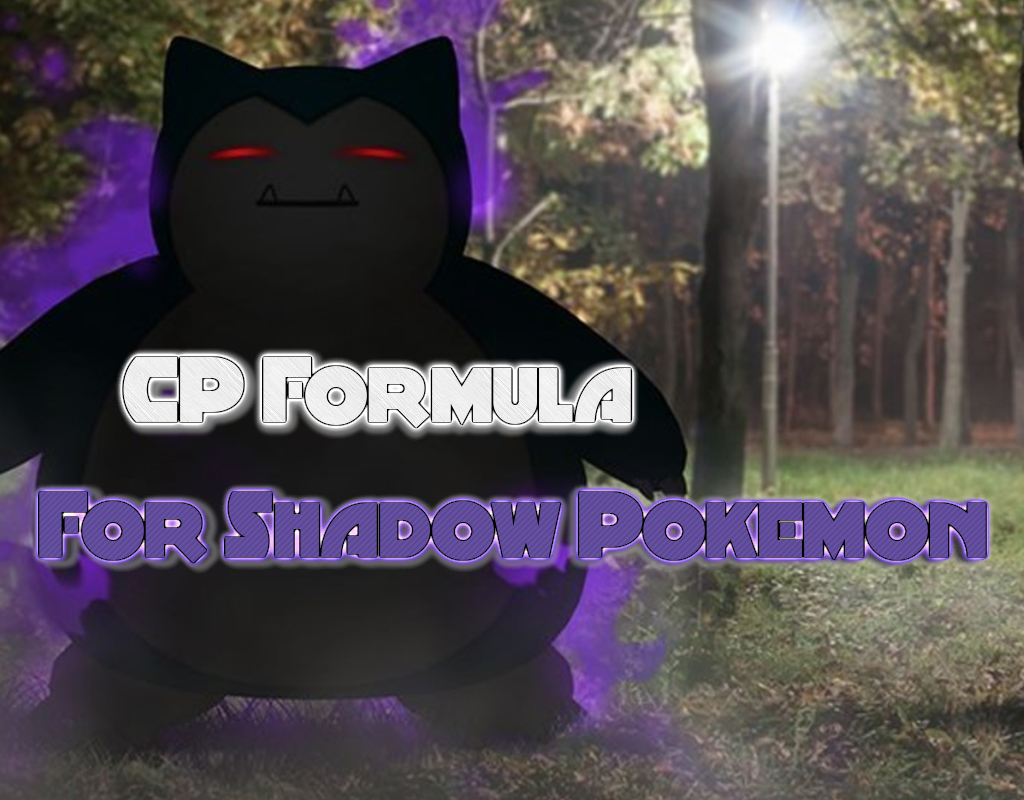 On July 22nd, Team GO Rocket snuck onto the scene to steal Pokestops and challenge players to Trainer Battles! With them, they brought mysterious Shadow Pokemon – spooky, evil-eyed, and with Combat Power far higher than we’ve seen previously in Trainer Battles. Before Team GO Rocket could blast off again, celandro and I got hot on the trail to crunch numbers and solve the CP formula behind Shadow Pokemon.

Shadow Pokemon that appear in Team GO Rocket invasions have a few key features that we’ll detail below:

Introduction to the CP Formula

Before we dive into Shadow Pokemon, let’s have a quick refresher on how stats work for regular Pokemon. Each Pokemon has three base stats (Attack, Defense, Stamina/HP), three individual values (IV’s) that add a small bonus to the corresponding stat, and a CP multiplier (CPM) determined by Pokemon level.

A Pokemon’s CP is calculated with the following formula:

A Pokemon’s effective stats are calculated with the following:

Note that a Pokemon’s CP and Stamina values are rounded down to the next whole number, while Attack and Defense are not.

Likewise, this Swampert’s Attack stat at level 40 would be:

Now that we’ve covered how regular Pokemon work, let’s take a look at what makes these mysterious Shadow Pokemon different!

Shadow Pokemon belong to 4 observable tiers, which determine their Pokemon level and a base Attack multiplier. The table below shows the different tiers and their corresponding values.

For example, Swampert is considered a Tier 4 Shadow Pokemon, so it appears at level 40 with a base Attack multiplier of x2. We’ll take a look at its final stats in a bit, but there are a few other things we have to take into account!

This was one of the tougher nuts to crack when trying to establish a formula that fit all known Shadow Pokemon. We’re eagerly looking forward to Team Rocket’s return to gather more field research!

Now let’s put it all together! Once we know a Pokemon’s level, base Attack multiplier, IV’s, and the trainer level, we can reproduce Shadow Pokemon CP like this:

Let’s take our Shadow Swampert, level 40 with a x2 Base Attack Multiplier and a 14/12/5 IV combination, and plug it into this formula:

How much effective Attack does Shadow Swampert have? Watch out!

Below is a table of other Shadow Pokemon players have encountered, their in-game CP, and associated Pokemon level and IV’s.

Here are some Shadow Pokemon that have been encountered by players with different trainer levels:

These Shadow Pokemon are more mathematically unique than other boss Pokemon we’ve encountered in the game so far, so we’re excited to see what lies ahead when Team GO Rocket makes their mischevious return!