This article is going to be a bit different than most. Its intended to cover all the events of the last day and a half. There was so many things going on, raids, research, farming for stardust and of course updating the raid guide

Relaxing on the couch after a long day catching Pokemon at Santa Monica Pier to do my part to make sure we got our reward, I saw a post on Reddit.  Legendaries were out!. I fired up the Silph Road app and found a raid and went there. It was a bit disappointing, with a few people sitting in their cars and not gathered around. We never actually got together to start the raid at the same time. I think we could have beaten the boss if we had.    As I discovered quite painfully, Articuno is a serious beast and deals a whole bunch of damage. Going in with a small group of unorganized people is certain failure. Lucky for us, Niantic is not as diabolical as I am. While I would have had you fighting a level 50 pokemon with 15000 health in 180 seconds, Niantic has you fighting only a level 40 Pokemon with 12500 health in 300 seconds. A little bit of organization and a good legendary counter infographic should help solve the problem!  First to the video

My unfortunate Articuno raid did give have a nice side effect. I was able to analyze the data and figure out exactly what was going on with raid bosses.

So basically Flareon was the most obvious Pokemon that determined that the 0.85 value was too high. There were too many incoming quick attacks and special attacks before he died so we had to go lower.  0.79, the same as tier 4 raids, matched very well with all of 6 of the Pokemon from the video.

Saturday night and Sunday night was spent updating https://www.pokebattler.com/ with the following

Sunday raids were quite a bit of fun. I met up with a couple different groups and beat 3 Articuno and 2 Lugia.  Finding a good discord or slack group to meet up with people worked well and seems like a good idea. This is how I met one of the groups. The other was formed organically, took far longer to form and then broke up. Not very efficient. Using the Pokebattler raid guide was a useful way to make sure that I got the extra balls from high damage.  I tried to share the information from the guide but people were too excited to listen. More balls for me I guess!  On that note, it seems that if you want 3 extra balls, you do not want to go with a full group. The highest anyone admitted to getting was 1 bonus ball in our competent 20 person group.  Perhaps some people were not paying attention but I wouldn’t be surprised if the damage bonus is from doing a certain percentage of the bosses health. 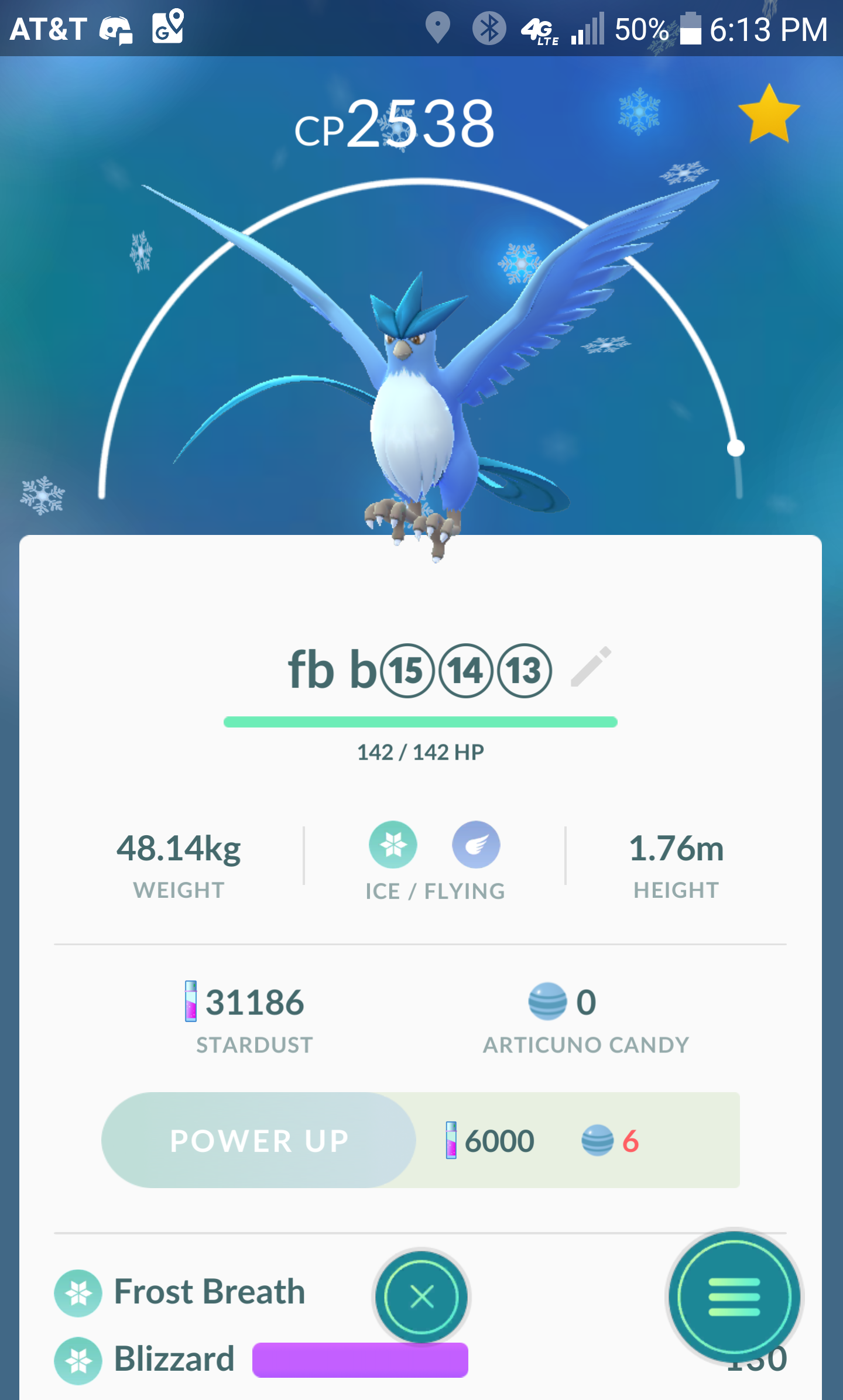 With the bonuses to star dust and experience, farming at a place with high pokemon spawn rate AND a good egg walking path AND good internet is crucial. I chose La Brea Tar Pits for this. While the spawn rate is not as crazy as the Santa Monica Pier, it is closer to my house, and importantly has a circular route you can take for walking. Santa Monica Pier was insanely crowded from what I hear and I always have issues with internet when this happens.  Los Angeles players, return to La Brea Tar Pits! They are great exercise. That is why you play the game right? Not to drive around in your cars all day looking for legendary raids ;).

Now that the legendaries are officially out and the site is updated, its time for yet another infographic! Most of these bosses only have 1 type of move which makes them relatively easy to choose counters against. Lugia on the other hand has 3 very different, very powerful special attacks. Make sure to choose the correct counters based on move set! You can usually figure out which move it is ahead of time by looking at what Pokemon are suggested. 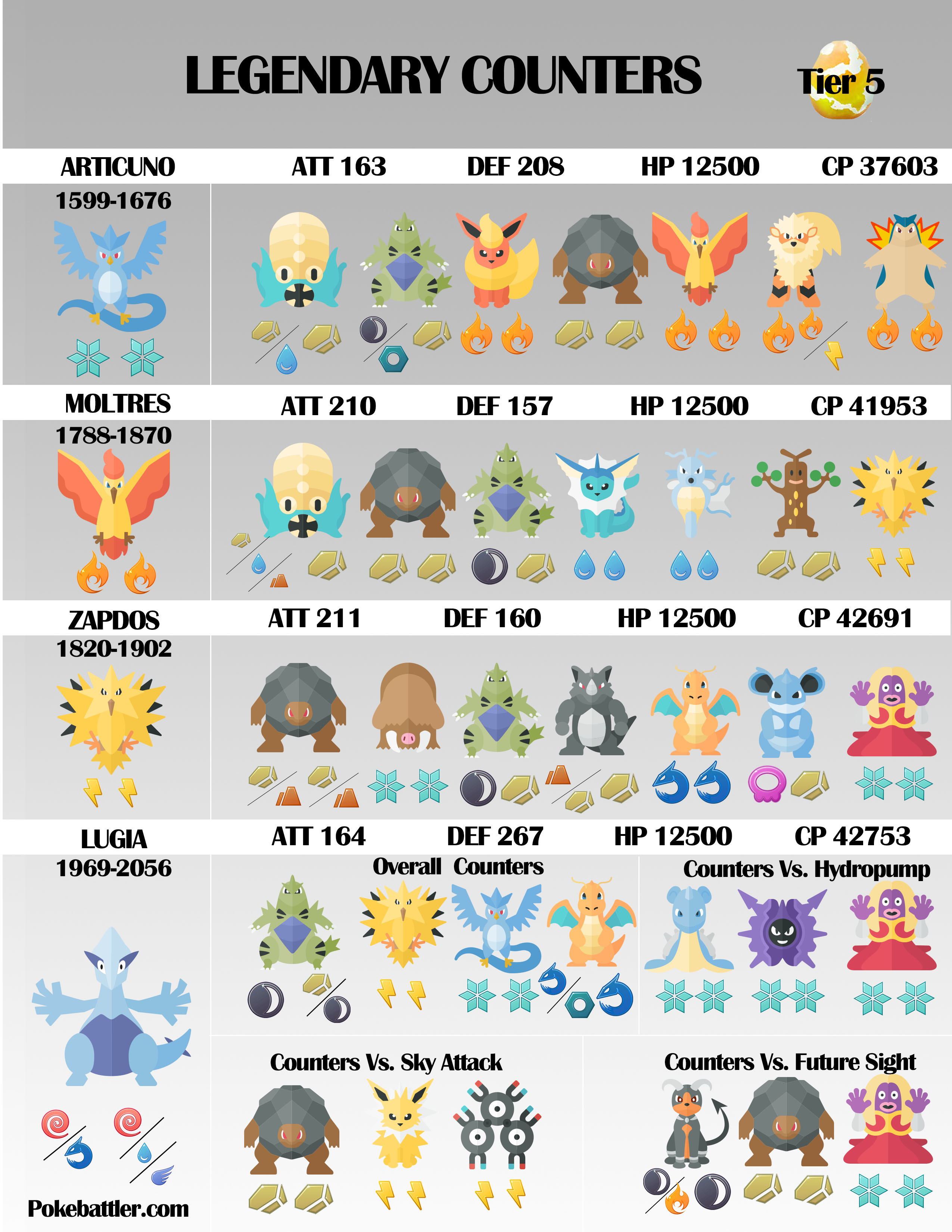 I had a ton of fun this weekend. It honestly passed by as a blur. The amount of content in this article would normally be spread out across at least 3 separate articles. I hope everyone enjoyed the format. I certainly enjoyed writing it. If there is any take away from this, it’s that the vast majority of players out there are NOT reading articles like these. They are not using good counters for your fights. You won’t beat Articuno with 6 random players or Lugia with 8 random players if they are not prepared. Even telling them which pokemon to use before the fight starts won’t work because they haven’t powered up the right pokemon.

The only solution is long term education. Point them to the Silph Road Reddit. Let them know about Gamepress. Tell them about Pokebattler. Its in everyone’s best interest to inform others about these resources. An educated player base will make these raids easier for everyone involved.