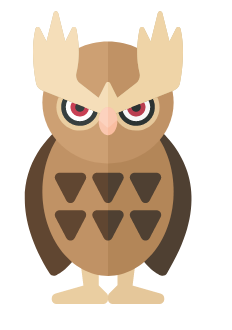 TL;DR: Noctowl is a very tanky generalist prestiger and it packs a punch against Snorlax.

Some long-time players may remember the times when Pidgeot with Wing Attack / Hurricane was considered the best commonly available prestiger. In particular it was excellent against Snorlax with Lick and/or Earthquake.

Then came Gen2 with the movesets overhaul, Pidgeot can’t learn Wing Attack anymore, Hurricane has been outclassed by other charge moves and Wing Attack has been slightly nerfed in both duration and power.

So let me introduce to you the new King of Flying Prestigers: Noctowl!

Its best moveset, Wing Attack / Sky Attack, has a weave DPS of 21.7 (92% of the max possible neutral weave DPS) and it is neutral or Super Effective against everything but Electric, Rock and Steel.

But above all, Noctowl has the 8th-highest Defense x Stamina / Attack2 ratio among Pokémon capable of reaching 1300 CP at level 30:

According to my CP efficiency calculator, here is the relative performance of Noctowl (in terms of combined time and revive efficiency) against some of the most common gym sitters:

These are already pretty good numbers, especially against Snorlax. If your main concern is prestige per revive, however, that is where Noctowl shows excellent performance:

Anyway, Wing Attack is fast enough to allow flexibility when dodging the defender’s fast moves, so the rankings are similar in a dodge-all scenario.

Even if only #1 and maybe #2 are worth keeping, whenever I evolve a Noctowl I use it at least once in order to save a revive, just because of its tankiness.