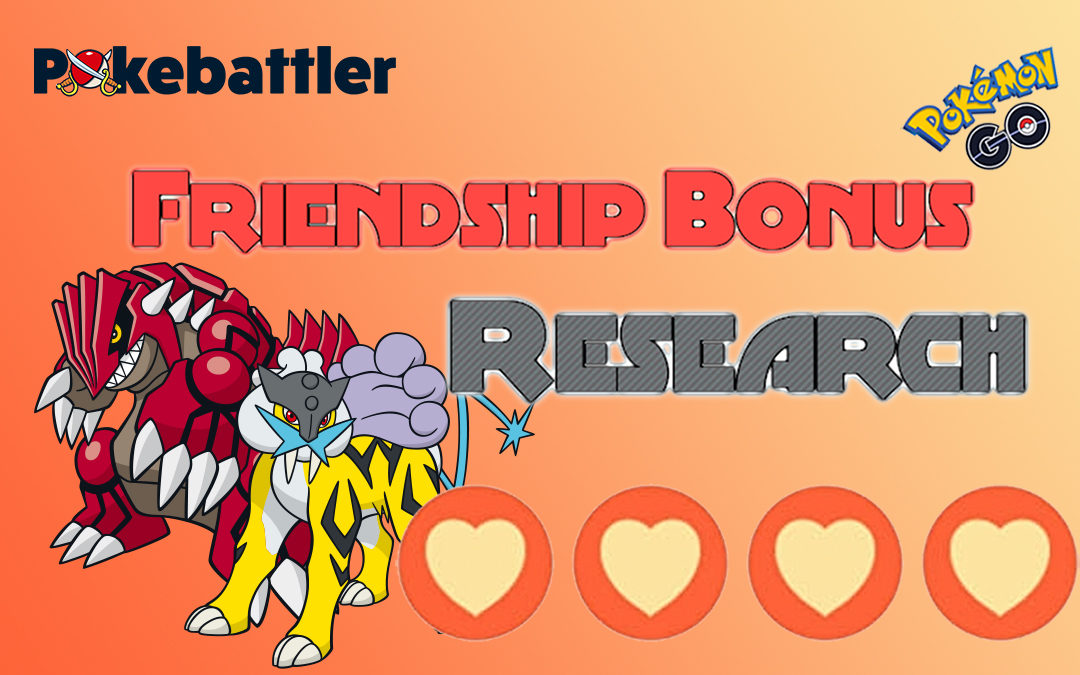 After Niantic’s announcement about friendship bonus, we have discovered how this has affected Ultra Friend and Best Friend damage bonuses! HUGE news for Groudon on Raikou day!

In the below videos, we chose Pokemon on the edge of a new breakpoint and tested them in a controlled way. We know that Tier 1 raids have 600 HP and Tier 2 raids have 1800 HP. By attacking with a consistent Pokemon, (both attack IV, level, boost, and move) we can divide the boss HP by the number of fast moves each raid took. This gives us damage per attack. TiredTortiss/Phillip do not do any damage in any of the raids, they are simply providing the friend boost.

In this video, we tested if the ultra friend bonus had changed as well. With the previous friendship breakpoint for a level 20 15 attack IV Venusaur in sunny weather, we would expect venusaur to need 17 Razor Leafs at 35 damage a piece to take down Magikarp. The next two breakpoints are for 36 damage (or 16.6 Razor Leafs) or 37 damage (at 16.2 Razor Leafs). The video clearly shows 16.6 Razor leafs attack placing the Ultra Friend boost between 9.7% and 12.9%.

Garchomp vs Shinx, 25 fast attacks needed meaning 24 damage again, best friend values that return 24 in the damage formula are between 11.8% and 16.5%

Armed with the calculations, we did the raid. I used the empty lobby trick to enter before u/ct9876, whose maxed perfect Ho-Oh we used for the test. Once he entered, he waited to ensure that the friend bonus icon was shown onscreen before attacking. He then used only fast moves for the duration of the raid and did not dodge. I did not touch my screen. You can watch the side-by-side videos here: https://youtu.be/siYKFStFxHo.
Reviewing the video, we each counted three times, and got 53 fast moves each time. On first view, there appeared to be a 54th fast move used, but it is clear from looking closely at the boss health bar that no damage is applied by that move.

Research 2 by CuttyWow setting the minimum for best friends at 14.9%