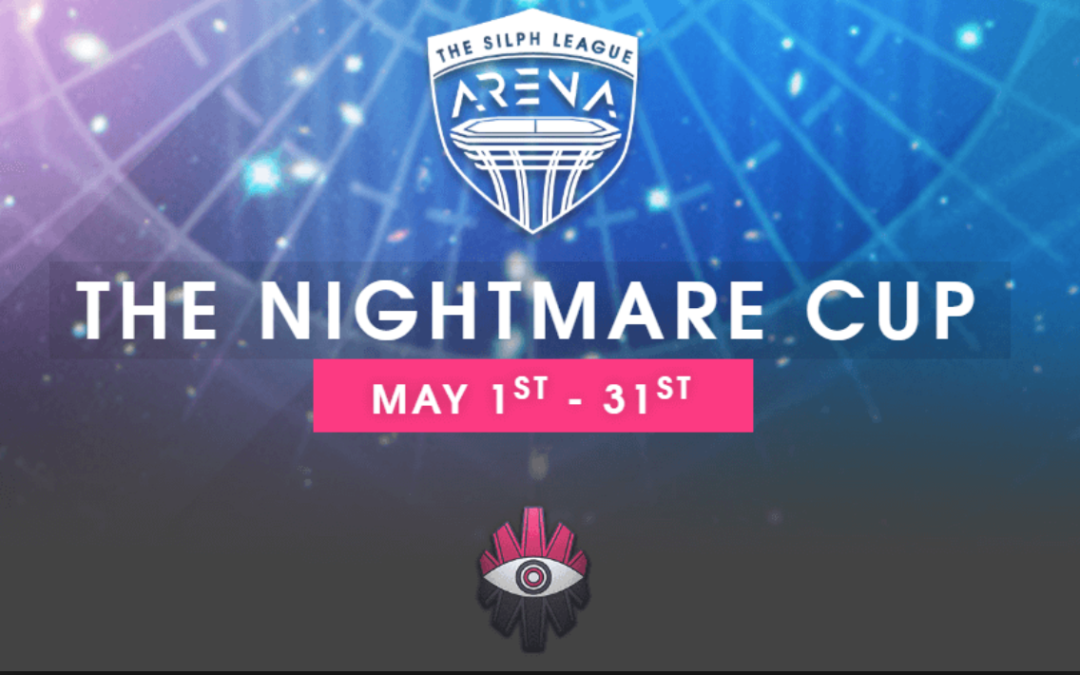 This has been the busiest month we have seen with Silph Arena Tournaments to date. With everyone’s local scenes having Season 1 Regional and Nightmare Cup Tournaments coinciding with one another, having to practice and prepare for two different metas has been tough. I am here with a quick mid-month article to try and help guide anyone that still has Nightmare Cup tournaments coming. I am going to go over the Pokemon that have risen above the rest and show their levels of potency and consistency. If you aren’t using these Pokemon, you need to make sure you are prepared to face them in every round you play. Let’s get started.

When I originally drafted my early meta article, I had this mon pegged as a close second for best fighter after Hitmonchan, and then followed by Lucario. My big concern was Confusion being even more prominent in this cup, wherein Twilight Cup the rare Confusion users checked Toxicroak extremely well. Too bad Toxicroak doesn’t care about that and has the potential to beat basically everything not using Confusion. Having Mud Bomb makes it the biggest, and basically, the only Fighting-type Pokemon everyone consistently uses – especially in this meta being swarmed with Poison types. Counter is the old reliable at this point dealing solid damage even when resisted and generating reliable energy for the quick Mud Bomb spam. Choosing Sludge Bomb over Dynamic Punch really just allows you to be able to hit Psychic-types trying to counter you for big neutral damage if they decide to not shield you, or if they lose track of how many times you have used Counter. This Pokemon is again the undisputed king of another Silph Arena Cup.

In the Twilight Cup, Drapion was drastically overshadowed by Skuntank, but in the Nightmare Cup, it’s quite the opposite. Being able to have flexible fast neutral damage with Aqua Tail that is being generated by the energy-making machine of Infestation is the key here. This keeps Drapion doing reliable damage to its other fellow Dark Types, as well as consistent damage to matchups it loses to like Toxicroak, and also still having the back pocket Crunch to put a ton of instant death pressure on all of the Psychic types. Drapion really doesn’t have many Pokemon in this Silph Cup that it loses too badly to outside of the obvious Fighting-types. This giant pool toy looking scorpion has definitely found its place in the Nightmare Cup for sure. It has finally made me a believer of its ability in the great league.

In the beginning of this cup’s announcement, Hypno was an instant favorite. Everyone was chasing the legacy Shadow Ball and showing off the ones they already had. Clearly, it was because of it having extremely thick defensive stats, having the amazing fast attack Confusion to hit the Fighting-types, Shadow Ball to hit the Psychic-types, and the Hail Mary Focus Blast to hit the Dark types. It seemingly had it all for a monotype Psychic Pokemon. Well, now that we are halfway through the month, all of those predictions held true. If you have it, use it. There are however a few other Confusion users that are keeping up. Mainly due to people looking for alternatives if they don’t have the legacy Shadow Ball. Here are the most popular alternatives. Gallade with Confusion, Leaf Blade, and Close Combat is the least seen but still offers unique Fighting Psychic type combinations to take neutral damage from Dark attacks hoping to have more time to get to that Close Combat nuke when shields are down. Claydol with Confusion, Gyro Ball, and Earthquake uses its Ground typing to offer electric type immunity to easily check Alolan Raichu. The immunity allows it to farm a ton of energy for big Earthquake damage on the Poison Dark types that come after Raichu dies. Finally there’s the favorite alternative- Bronzong with Confusion, Heavy Slam, and Flash Cannon which has the Steel-type attacks hitting everything neutrally. Carrying both Heavy Slam and Flash Cannon gives you flexibility for an earlier hitting charge attack vs the later hitting stronger nuke option.

In the early stages, every simulations website showed Shiftry being a top threat. I and many others believed in practice it wouldn’t amount to much beyond an off the collar pick unless the meta developed in a specific way. Well, here we are in a developed meta that lends itself to Razor Leaf being still able to do what it does. Having the ability to swiftly dispose of meta popular Pokemon like Spiritomb, Umbreon, Alolan Raticate, Alolan Raichu, Hypno, Claydol, and Bronzong all by just tapping your screen ignoring shields is something you can’t ignore. If you are able to trap Shiftry against any of these Pokemon and farm energy while slicing it up with Razor Leaf you will be setting a huge tempo for the remainder of the match. Another Pokemon that performs a similar role is the legacy community day super rare Tyranitar with Smack Down, Stone Edge, and Crunch. Even then though I believe Shiftry does this job better unless you’re extra afraid of Xatu.

This adorable little mouse was also an early favorite that just like Hypno has kept its relevancy into the meta. Having a similar mentality of Drapion and Shiftry of dealing reliably neutral flexible damage to almost the entire Cup is something you cannot ignore. Also, the speed that is represented here with the Spark + Thunder Punch combo dishes out one of the earliest charge attacks possible. The main two Pokemon Alolan Raichu disposes of are the aforementioned king Toxicroak, and the next to be discussed Xatu. The only similarly speedy fragile shield pressure Pokemon in this cup is Murkrow with Peck. Drill Peck, and Foul Play. Even then I believe Alolan Raichu just does it better.

Back in February I was having some predictive analytical conversations about a potential future Psychic type cup and being paired against Fighting types or Bug types. The Psychic Flying totem pole bird was an instant lock in my mind of seeing its future relevancy, so I was beyond happy that my prediction was correct that long ago. Xatu has Ominous Wind as a Ghost attack hitting other Psychic-types for super effective damage along the same idea as Hypno, and then hits most of the rest of the cup with Flying type neutral damage. It will also give you the 1 in 10 chance of boosting your Attack and Defense stats 2 stages each which can give you enough survivability to get to an extra charge attack for this more fragile Pokemon. The king of the cup Toxicroak gets pushed around pretty hard by Xatu as long as you remember to have a shield for that incoming Sludge Bomb. Xatu is a very unique Pokemon I could see being relevant in future cups as well.

This Pokemon has always been one with a strong fan base of trainers that always want it to be a strong force. After the addition of Acid Spray and Snarl, I believe it made Alolan Muk a lot less predictable from seeing it on team preview. This is for sure one of the most flexible pivot Pokemon for a team composition to have in the Nightmare Cup. Snarl and Poison Jab as fast attacks give it much more reliable energy gain for constant charge attacks before being KO’ed. Bite, however, is the more straightforward option with extremely low energy gain lending itself to this specific meta very well. Its use will at most yield only one charge attack, so keep that in mind. Its main position to shine is after biting a psychic type to death then using Acid Spray on incoming Pokemon. I think for a double dark strategy Alolan Muk is almost always needed. Also, for other trainers, Alolan Muk having Acid Spray makes its charge attacks to be almost non-threatening causing a lot of surprise nukes with Sludge Wave. Make sure if you choose Alolan Muk you have the best fast attack for pairing with your play style and with your team composition. A couple of Pokemon that do similar things to Alolan Muk are Umbreon with Snarl, Foul Play, and the legacy Last Resort as well as Alolan Raticate using Quick Attack, Hyper Fang, and Crunch. I do believe Alolan Muk is the best at this role though, offering tons of unpredictability with all of its possible roles.

This was in my mind THE most hyped up Pokemon after the initial announcement of the Nightmare Cup. Spiritomb single-handedly shaped the meta whether you realize it or not. Almost everyone was walking Spiritomb as their buddy to save rare candies which brought the idea of him to the forefront even though not many people committed to making one to test with it in the early stages of the meta. This brought everyone to develop a reliable counter for it since there aren’t that many. The most notable ones here are Shiftry, or any of the extremely defensive Dark types like Umbreon, Alolan Raticate, and Alolan Muk. Still, Spiritomb remains an extremely potent threat with its wild card status having the 1 in 10 chance of boosting potential of Ominous Wind. Just like Xatu, this makes a few matchups swing way in its favor, but unlike Xatu Spiritomb actually has bulk for lasting power to make further use of the boosts. This alongside it having very few Pokemon that reliably beat in this meta make it a threat. If you have ever been on the receiving end of a boosted Spiritomb you know how much of a momentum shift it is having the huge downhill effect on that game for you. Make sure you have a contingency plan for a potential Spiritomb matchup.

Wrapping up, these eight Pokemon listed are what I consider the best in their class of what they do for the Nightmare Cup. The few alternatives I listed are mostly used due to the rarity or the cost of making the featured species. Make sure you balance your team accordingly for the future cups you are involved in so we can all survive this Beautiful Nightmare together. See you all next month.