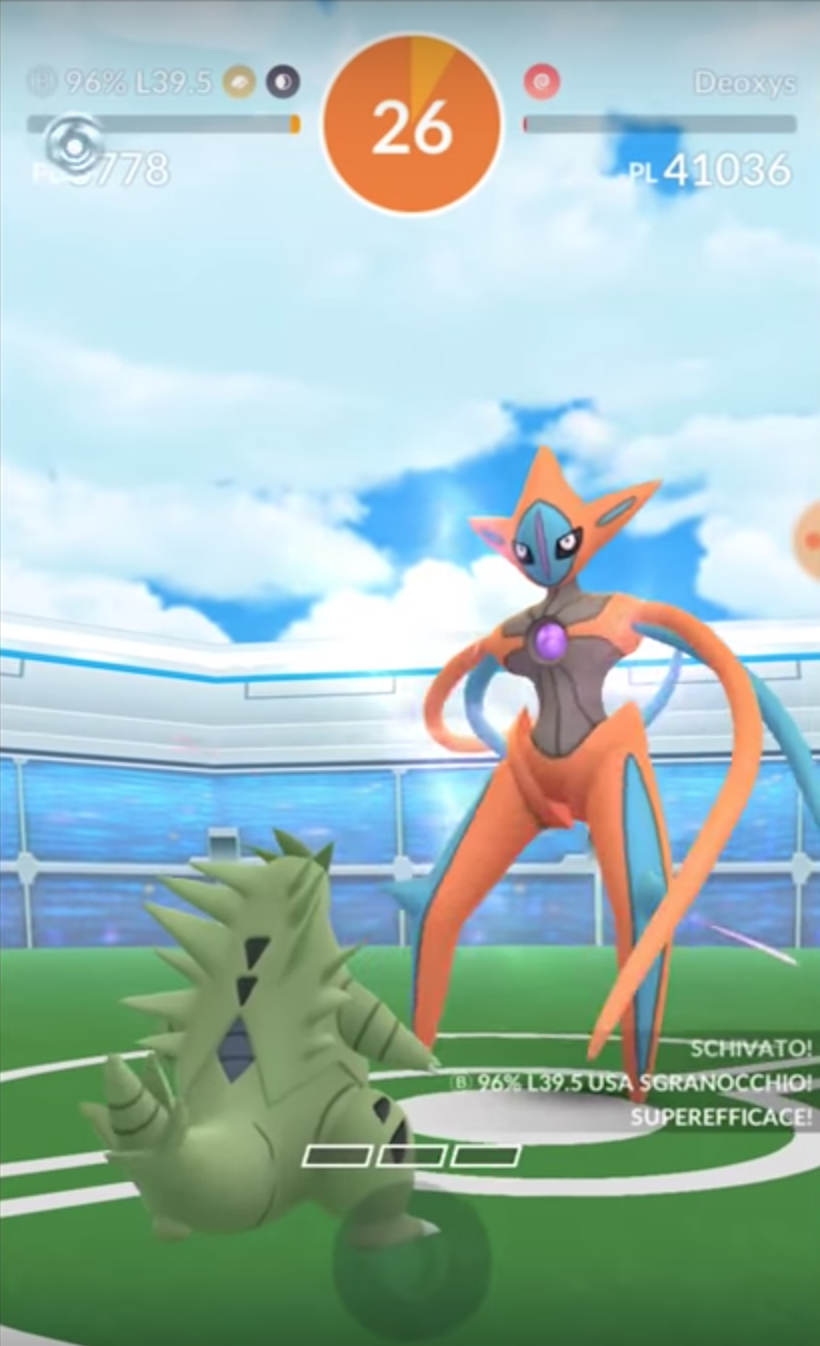 Congratulations to the winners who both had amazing performances before the raid boss hp buff:

Many people wondered why the contest didn’t end when the hp buff came in to effect. Celandro must have known something because the Lowest CP was definitely beatable and should have been beaten.

KToMmi, a Gio0822 was quite luck , a lower CP team was scuttled right at the finish line, despite the increased difficulty. Here’s KToMmi’s attempt to undercut Gio0822 by defeating Deoxys – Attack after the hp buff using one L40 Tyranitar and one L39.5 Tyranitar

Whoa, what just happened to KTOMmi?

Despite nailing his dodges for five full minutes, KToMmi’s Tyranitar was KO’d right at the end by a phantom hit.

“Phantom hit”, or “mossa fantasma” as KToMmi calls it (everything sounds nicer in Italian), is the name given by the raiding community to the belated application of damage that had appeared to be dodged. An apparent effect of server/client desync, the client (your phone) will show the “dodged” text and the reduced damage at first, but will later be overruled by the server, often resulting in a KO. The damage is not always applied immediately, so it’s difficult to tell which apparent dodge wasn’t registered. Phantoms can come in bunches and are the bane of anyone attempting to dodge in raids.

Why do they matter?

If you watched the video, it should be pretty obvious. Server desync (both phantom damage and early timeouts) routinely turns straightforward wins into close calls, and tough wins into losses. In this case, it prevented KToMmi from winning this contest, and consequently a $100 check and a free year of a premium Pokebattler subscription!

Frequent phantom damage also means that your hard-earned stardust and candy go to waste. A L40 perfect Tyranitar has 189 HP. A Psycho Boost from a Deoxys-A raid boss does 32 damage to the same Tyranitar. Assuming one phantom hit (a safe assumption, since each of the four Tyranitars in both the winning and runner-up videos took one), your Tyranitar is entering the raid with 157 effective HP. That’s the same as a level 24 Tyranitar—for 201,000 more stardust and 236 more candy! Dodging is meant to be a way to conserve resources. Instead, you need to spend time and effort grinding ways to accommodate server desync.

On a broader level, the repeated heartbreak of late-clock desync events has pushed many of the most creative and skilled solo raiders away from raiding, and away from the app. On top of that, dodging isn’t even recognized as a viable option in group raids, constraining creativity and resource efficiency even further. Server desync has hurt each raider, and has impoverished the community as a whole by limiting the fun to be had.

I thought the dodge bug doesn’t happen in solo raids?

The well-known dodge glitch that prevents swapping out a fainted ‘mon has not been reproduced in solo raids, but there are a host of other symptoms of server desync. Phantom damage you can see clearly in the video; here’s a rundown of other common symptoms: https://pokemongo.gamepress.gg/taxonomy-pokemon-go-dodge-bugs-examples-and-analysis

Why doesn’t Niantic patch that?

We’re not sure! Server/client synchronization is a difficult technical problem, but plenty of other games manage it without the litany of issues experienced in Pokemon GO. One would expect there to be an industry-standard solution that could at least lower the frequency of fun-killing desync events. Niantic has yet to give us any explanation for why their product struggles so badly.

What can I do about it?

In-game? Not much, unfortunately. Phantom hits are so pervasive across the network, region, and hardware that we’ve devoted a whole channel on the pogoraids Discord server to screenshots, gifs, and :sob: emojis. Even our server logo and mascot pay homage to the ubiquity of server desync.

In real life, though, you can join us on Twitter and use the #AntiPhantom2020 hashtag to tweet your own phantoms @NianticLabs and @NianticSupport. Pokebattler has shown each of us that much, much more could be done in raids. Unfortunately, server/client desync prevents everyone from achieving internet glory. In a functional app, the creative possibilities—and the fun—would be truly limitless.

u/CuttyWow is an admin of r/pogoraids, a former avid 1v1 raider, and a leader of the #AntiPhantom2020 campaign.

KTtoMmi’s Version of the Story

I’ll submit to you a kinda controversial situation. I’m KToMmi, one of the most dedicated players to your LTCP Contest for Deoxys – Attack. I’ve always wanted to compete for the win in that category, and I believe I could have won it if only I could find a Psycho Boost one before the Raid CP Rebalance… (yes, I’ve done plenty of EX Raids but none had Psycho Boost as charge move).
After tens of tries, I eventually encountered one with that move. But yeah… It was right after the CP Rebalance.
“Okay I’m done, it’s gonna be impossible now with 25% more damage to be done” I could have thought. But I didn’t surrender and strived to make it all the same. I knew there was a very very small chance to succeed, and it would have taken both luck and great skill.
The current record was 7610 CP. I knew it was still very high and not very well played so I figured it could have been further improved. After the rebalance, I thought only a couple of Tyranitar’s could make it. So I brought one to L40 and one to L39.5.
Long story short, after many many tries (and bugs), I reached the point you can see in the video I’ll link below. I am very proud of how I executed it, and I’m aware that it couldn’t have been any better realistically – in fact it’s the best of all my tries. But as you can see, I was plagued by the game itself and its stupid bugs. You can see I’ve been hit not only once, but even twice by the phantom damage bug… Even at the worst possible moment (a fraction of second before I could launch the ultimate Crunch, which was already loading).
Being 100% honest, I’m sure you can acknowledge that this was a victorious attempt. With 25 seconds to spare (which I believe is impressively close to the best of the simulations) and plenty of advantage in terms of HP on my Tyranitar, it would have easily been a win even with 1 Phantom damage bug. It was literally 1 Crunch away and with enough health to take several quick moves – or enough time to wait for another charge move.
I really believe this is a noteworthy submission to your contest, given that I basically beat the record, obtained comfortably at the beginning, after the CP rebalance.
I’m sorry for the wall of text but as a borderline case I wanted to make sure to express my conflicted point of view. I’m looking forward to hear from you and I hope you can understand the situation.
Best greetings!

I have watched it and am sorry for your close attempt. My wife will be creating a YouTube video from it, we already have VO from Kieng.

I will be deciding on an appropriate reward. Maybe an honorable mention on the contest article and a free account if that sounds good to you.
Thanks for sending the video in!

What should the reward be? Let Celandro know by commenting on the youtube video.