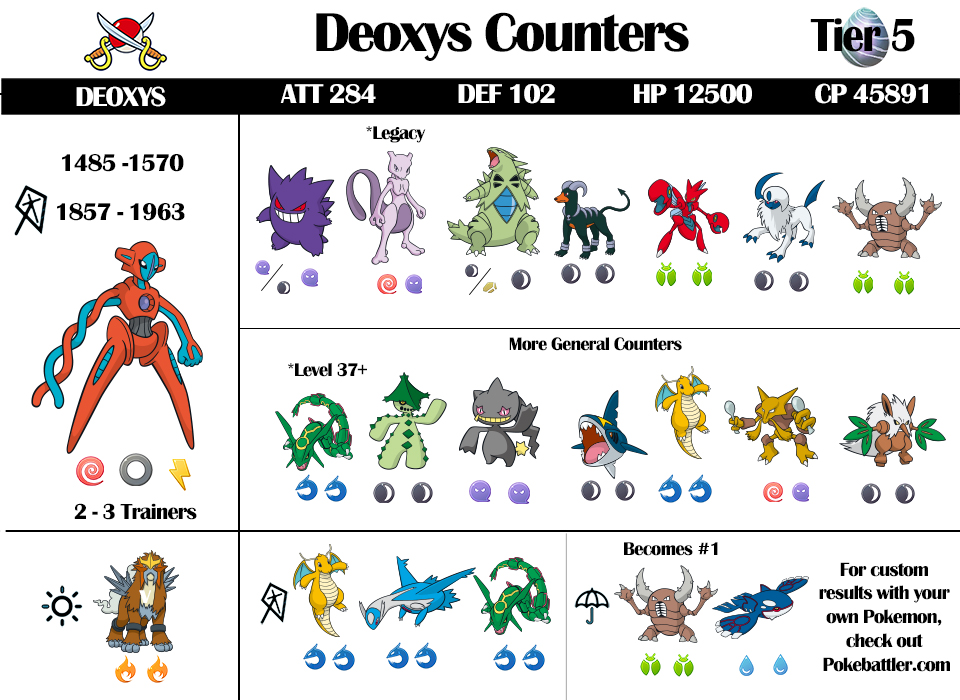 Pokebattler is hard at work updating the rest of the guide, check back tomorrow!

The new EX Raid boss is here with raids starting TODAY October 1st. Niantic decided to throw up for a loop and implement a different version of Deoxy than we expected so we JUST updated the site to reflect that. The counters changed a bit too, and this article reflects those changes.

The Low Down on Deoxys

Deoxys is the most glassy glass cannon to ever grace Pokemon Go. He’s like an extreme version of Alakazam or Gengar. He’s got super high attack, but dayamn is his defense low. It looks like he will appear in raids in his ‘Normal Forme; (Yes with an e) but isn’t currently catchable in his other Formes including speed, attack and defense. We assume that will eventually change? Deoxys Attack Forme is an even bigger glass cannon than Normal Forme which unfortunately is not necessarily the best thing.

So, the question of how useful is Deoxys, particularly Attack Forme, is a hard one to answer. When it comes to solo raids, tiers 1-3, and you’re a very good dodger, then yes, Ultra high attack can be useful. But for raids with multiple players where dodging doesn’t work… he’s… less useful. The problem is that Deoxys will often die before getting off even a single special. That’s a pretty bad downside for a Pokemon that is going to take a lot of stardust and rare candy to power up. You know all those times Gengar comes in and gets one shotted before getting off a special? Deoxys Attack Forme will be even worse.  But so far his other formes aren’t available, so we don’t know when any of this will matter or if stats will change by the time they do come out…

Also check out Pokebattler founder’s Livestream he did last Sunday. The second half talks about Deoxys.

Deoxys Attack Forme is the biggest glass cannon in Pokemon Go. If you use this Pokemon, we recommend you know how dodging works and how to avoid the dodge bug. You should only be dodging quick attacks if it means you can get off a special attack. If you do not get off a special attack, your dps is pretty terrible. For example, against Mewtwo, you need to dodge a couple confusion for this Pokemon to be good but you do not need to dodge Psycho cut. Generally safer to use against single bar moves than double bar moves due to the risk of walking in to a special immediately after the previous Pokemon fainted. So be careful.

A midling attack and defense Pokemon with terrible stamina

Now you can use your glass cannon against this even glassier glass cannon. Both the double ghost and the dark/ ghost combo of Gengar are strong against Deoxys. And of course he will die pretty quickly, so you want to use him with care and make sure you can get off those essential charge moves. Note that even non-legacy hex/shadow ball Gengar is amazing against most Deoxys attacks. However he moves down to #7 counter against Pyscho Boost, something to take into account if you do know Deoxy’s movesets.

Mewtwo’s Shadow Ball move is an incredibly strong charge move and is  great against psychic mons like Deoxys. Too bad it very recently become a legacy move. Hopefully you got at least one before it went away! I know I’ve been raiding Mewtwo to get candy to power up my Shadow Ball Mewtwo as its useful against both Mewtwo and Deoxys!

Tyranitar continues to be a ridiculously useful raid attacker. Something like 11 of the 18 legendary raids have been weak to dark or rock. He shrugs off Psychic attacks and has extremely strong Dark attacks at his disposal. Although double dark is the strongest, if you have a Smack Down Tyranitar and short on good counters, feel free to use a charge TM to switch from double rock to rock/dark for this fight and for Mewtwo as well.

These double dark guys are strong against Psychic Deoxys. And since they are also strong against Mewtwo, they can pull some double duty as your best back up raid attackers! Note that double dark Alola Muk did not make this list but you can use one if you want to mesmerize your fellow players with psychedelic colors (and your group is overpowered for the fight of course).

Apparently, our extra row of general counters on our last Mewtwo infographic was popular. And we at Pokebattler like to give you people what you want. So we’re doing it again with Deoxys. Obviously, these guys are a bit weaker than the top counters, and not ones you really want to spend a ton of stardust on… but if you’ve already got some powered up ones or level 35 ones you found in the wild then you can make use of these dudes!\

Dragons are always decent against Deoxys. Say that three times fast! At level 37, Rayquaza hits a break point and becomes pretty strong. And since you should already have some powered up, he’s a good choice. And we’d hope you’d have a powered up Dragonite by now.

These dark Pokemon pale in comparison to double dark Tyranitar, but if you’ve got some powered up they ain’t half bad.

These shadow ball Pokemon aren’t exactly Mewtwo, but they put up a decent fight.

Since Entei has been the field research reward for a while now, you probably have a few! He’s a strong mon in general so with sunny weather, bust him out and don’t be afraid to spend stardust on him, if not for Deoxys, for future raids as well!

Pinsir is already a strong general counter, but a boost from the rain makes him numero uno! And the always strong Kyogre always becomes a top row counter in the rain.

In Windy weather, Deoxys gets a boost in his catchable CP but… his defense still sucks. Don’t worry, you probably won’t notice.

These dragons all get a 20% boost to its attacks and become extra strong attackers in the wind. Hopefully, you have some of these powered up already.

We’ve done our best to simplify things down as always, but we highly recommend using our custom raid guides. Entering in the exact Pokemon you have is always the best to pick your counters.  Hopefully, this guide gets you ready to raid whenever you receive your first pass!

Happy Hunting and thanks for reading!