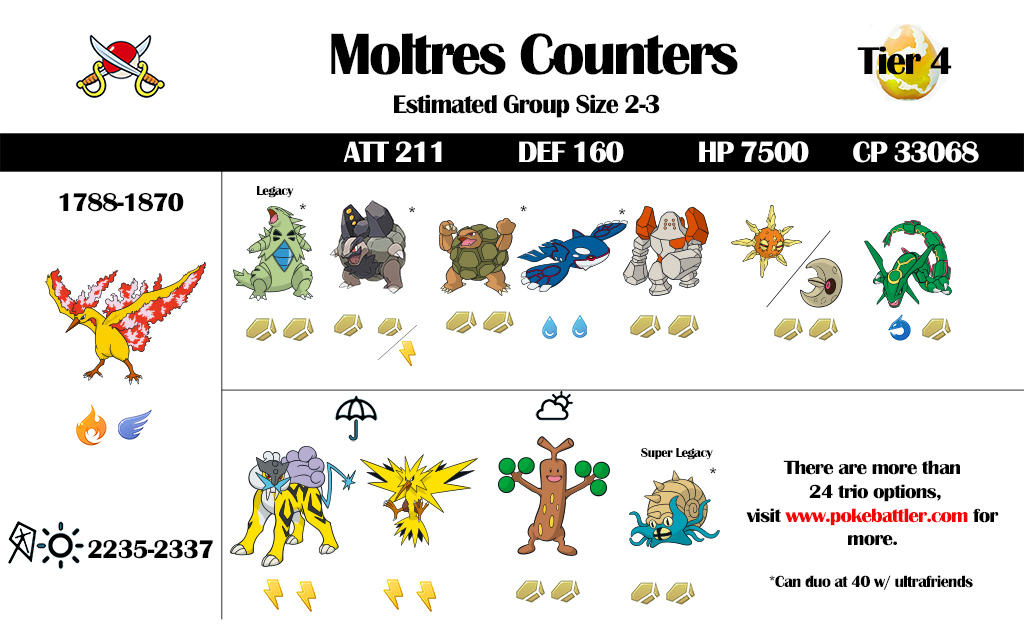 Based on level 35, the best counters are the first row with their best move types below. These counters will give high DPS and last a reasonable amount of time in combat. Specific counters in certain situations, such as against certain move type or in certain weather, are listed on the second row. Pokemon who can duo are marked with an asterisk. Every single pokemon on this list can trio at level 35 or better. For more specific info with different levels or your own Pokemon, use our custom raid guides linked above.

Moltres will be available for 3 hours on September 8th with the new Flying Move ‘Sky Attack’  in raid battles around the world. Every gym will light up at the same time with Moltres raids. Grab 2 to 4 of your friends and head to where the most gyms are in your neighborhood and snag a few of what we feel is the BEST fire Pokemon available right not. He’s higher DPS but a bit less tanky than Entei. Overall he tops our list as the most useful fire mon and is the top counter for a LOT of raids. As a bonus, Moltres will now have the Sky Attack move which is higher DPS than overheat and will make him formidable against fighting foes like Machamp.

Based on prior special events, Moltres will likely NOT have Sky Attack on defense. This doesn’t really change the orderings very much but I did want to call that out. These orderings include the possibility of Sky Attack being on defense as there is always a chance Niantic will change something **cough cough bug cough cough** last minute.

A note on Sky Attack. Sky attack is an awesome 2 bar move and moves Moltres up from #23 to #12 on generic raid clearing counters. This makes it a good choice against Muk, Chansey, Steelix and more. You can check out the Moltres Pokedex for best attack matchups.

The counters for Moltres are pretty consistent. With the exception of rainy weather, it’s rock rock, Kygore, and then some more rock, starting with the strongest rock Pokemon in the game. You also may notice there is a lot of similarities with our Zapdos counters. Fancy that. Hopefully, that means you’ve got these guys powered up and ready to get back into battle for Moltres. Moltres has a double weakness to rock so its difficult for other Pokemon to catch up, even with a weather boost.

The first five counters listed are all duoable at level 40 with ultra-friends bonuses. And if you’ve got enough double rock Tyranitar, it becomes possible (if highly improbably) at level 35 he’s that strong.

EDIT: Moltres will NOT have sky attack when you’re attacking him as a raid boss but he WILL have it when you catch him. That makes Alolan Golem number 3 overall counter, puttijg him behind regular Golem.

Tyranitar continues his reign as a top counter with his double rock moves, with a very high DPS and reasonable tankiness. His double rock moves were only available during his community day a while back so let’s hope you got at least one or two. The most important thing is that you have the quick move be Smack Down, which is the legacy move from community day. In partly cloudy weather and with a bit of a friendship boost, this is a fairly easy duo if you have enough of these dudes.

Golem is actually a bit better than Tyranitar if you want to conserve potions at lower levels, but is a bit lower in the DPS. It’s perfectly possible to trio Moltres with 2 of your friends with level 20 Golem or Alola Golem.

Alola Golem beats out Golem thanks to Moltres’ Sky Attack move and it’s vulnerability to electric. This means Alola Golem finally has the chance to be the #1 currently available counter without having to share the title with plain old Golem. Must be annoying to be the younger sibling and never be able to beat the older.

If you just do a straight search on the strongest counters of fire Moltres, Omastar comes just after Tyranitar. But it’s that blasted legacy Double Rock Omastar only available seemingly eons ago before most of us knew how awesome he would turn out to be. So if you are like us and don’t have one, we feel you. Omastar with water moves still makes the trio list for those of you who don’t have 6 legacy level 40 Omastar. Those who did, did you trade with your friends who haven’t played the game in 2 years?

As Regirock was just recently available, hopefully, you managed to get a few of this annoyingly under-powered Pokemon.  But since he’s still the third strongest rock Pokemon, making him useful here if you somehow mistakenly powered up a Regirock .

This rock duo is pretty weak normally. But rock is so strong against Moltres, you can use them here! If you’ve already used the other, much stronger Pokemon we’ve already listed first that is.

Although most of us probably TM away an Ancient Power Rayquaza as quickly as possible, if you happen to be a legendary hoarder like us and have some Ancient Powers you caught already weather boosted, they may be useful here.

So electrics aren’t that great against Moltres unless they get a boost from the rain. In that case, Raikou, the strongest electric mon, comes in just behind double rock Tyranitar and Kyogre, who gets a nice rainy boost, as the third strongest Moltres Counter.

He’s no Raikou but Zapdos also gets a nice boost in the rain making him come him behind the two Golem as the 5th strongest counter against Moltres.

Silly ol’ Sudowoodo becomes a decently strong rock mon with a boost in partly cloudy weather against Moltres and he’s number 12 or so without the boost.

A whole Lotta Trios Goin’ on

Although you may not have strong enough mons to duo Moltres, if you’ve got enough level 35 mons, you can trio him with not just the counters here, but with additional, and often rarely used counters such as  Gyarados, Mew, Salamence, Aerodactyl, Jolteon, Kabutops, Vaporeon, Swampert, Amaldo, Blastoise, Starmie, Mewtwo… the list goes on and on. Check out pokebattler.com to see what wacky trios you can use to take down Moltres. Basically electric, rock and water moves, and for some Pokemon, fury cutter. Fury cutter shows up on quite a few pokemon as their best quick move due to its insane speed and energy generation. It is also an amazingly fun move due to its speed, so maybe try it out with a Kabutops on one of your Moltres raids.

These mad three-hour raid window events are always fun but a little crazy. It certainly makes raiding more interesting while we’re stuck with the not exciting Regis. Moltres is THE strongest fire Pokemon making him very useful and the new Sky Attack makes Moltres once of the strongest flying move Pokemon. Even if you have a few stellar Moltres already powered up, you’re going to want some more candy at the very least. AND he will get a boost in the summer sun, which for us in southern Cali, is almost guaranteed. Scratch that, it will be perfectly sunny and Pokemon Go will say cloudy. I guarantee it. I’m not bitter.