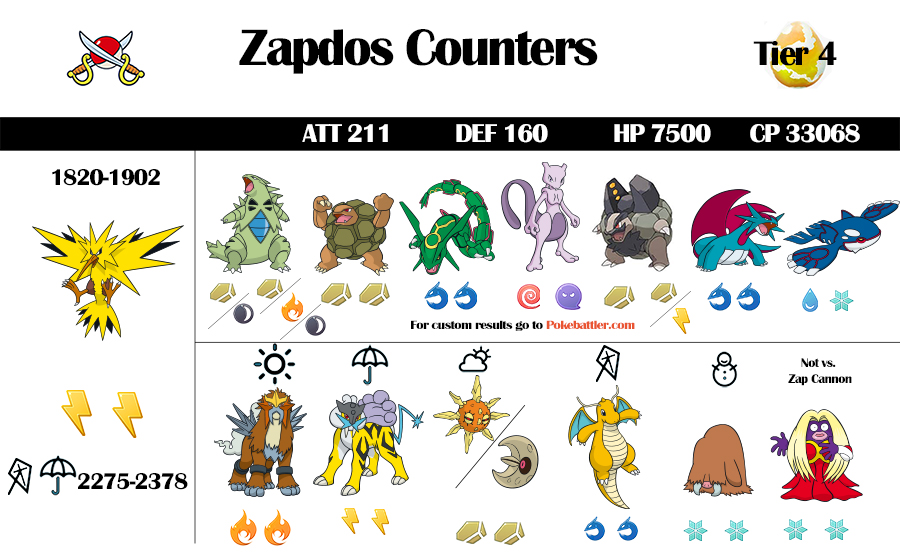 Based on level 35, the best counters are the first row with their best move types below. These counters will give high DPS and last a reasonable amount of time in combat. Specific counters in certain situations, such as against certain move type or in certain weather, are listed on the second row. For more specific info with different levels or your own Pokemon, use our custom raid guides linked above.

Zapdos will be available for only 3 hours on July 21st in raid battles around the world. Every gym will light up at the same time with Zapdos raids. Grab 2 to 4 of your friends and head to where the most gyms are in your neighborhood and you can get yourself some very good electric type Pokemon! As a bonus, Zapdos will now have Thunder Shock which moves him from his previous position at #2 to up to #2. Ok so maybe #1.7. It closes the gap between Zapdos and Raikou by about 30% so this is a very good upgrade.

Zapdos Movesets: Zapdos will always have Thunder Shock for his fast move during community day and all the charge moves will be electric as well.

Zapdos has a fairly interesting set of counters. You have your rock types, your dragon types and your ice types as well as Mewtwo. Rock and dragon Pokemon are in general much stronger than ice Pokemon which explains why they are so much higher on the list but if you run out of rock and dragon types, your ice types are a good choice, typically 10% worse than the others on this infographic.

Tyranitar is absolutely amazing with double rock moves, with a very high DPS and reasonable tankiness. In partly cloudy weather and with a bit of a friendship boost, this is a fairly easy duo. I recommend dodging a small number of specials when you are high health so you don’t have to rejoin. 25% dodge rate is more than enough. Non double rock Tyranitar (not inculding steel moves which you should TM away anyways) are also pretty decent.

Golem is actually a bit better than Tyranitar if you want to conserve potions, but is a bit lower in the DPS. It’s perfectly possible to trio Zapdos with 2 of your great friends with level 35 Gole you got on a sunny day. If you are bringing along a lower level friend, trade them a couple double rock Golem that you don’t need and your day will go much better.

The strongest dragon type currently available, Rayquaza does quite a bit of DPS but is not nearly as tanky as the rock types on this list. You hopefully have already TM’d to Dragon Tail and Outrage but if you have not, now is the time.

Confusion/Shadow Ball Mewtwo is an excellent generalist counter that shows up often on many of these infographics. Shadow Ball is arguably the best move in the game and confusion is high DPS as well (if bad for dodging).

Alola Golem is similar to Golem but is not quite as tanky and a little lower DPS due to the higher number of deaths. It looks cool though and is still a great counter and his electric special move is still decent.

A weaker version of Rayquaza but a good choice if you manage to have one, which I don’t.

The only ice move Pokemon to make the generic counter list is a water god. It makes its way up to #6 by level 40 with Great Friends boost.

The best non-flying fire pokemon is quite good in sunny weather.

Raikou, the strongest electric mon, as usual, is strong in rainy weather.

These rock mons are decent substitutes for Tyranitar or Golem in partly cloudy weather. But in normal weather, they are too weak.

Dragonite almost makes the generic counters list but is edged out by Salamence. As usual, windy weather makes Dragonite a great counter.

Anything but Zap Cannon

One of the best glass cannons in the game, Jynx does amazing against every move but Zap Cannon. Against Zap Cannon she sucks. 50% more deaths than Tyranitar but very similar DPS. You are looking for Frost Breath/Avalanche moves.

These mad three-hour raid window events are fun but a little crazy. Especially when EVERY SINGLE GYM becomes a Zapdos gym for those 3 hours. Zapdos is probably even more useful than Articuno, so if you are able to go raiding with some friends you should definitely get yourself a few of these birdies, he’s a nice Raiku back up. And if you’re lucky enough to get some summer rain, you’ll be a nice boosted one saving you some stardust. Makes me kind of wish I didn’t live in Southern California. Ah well.