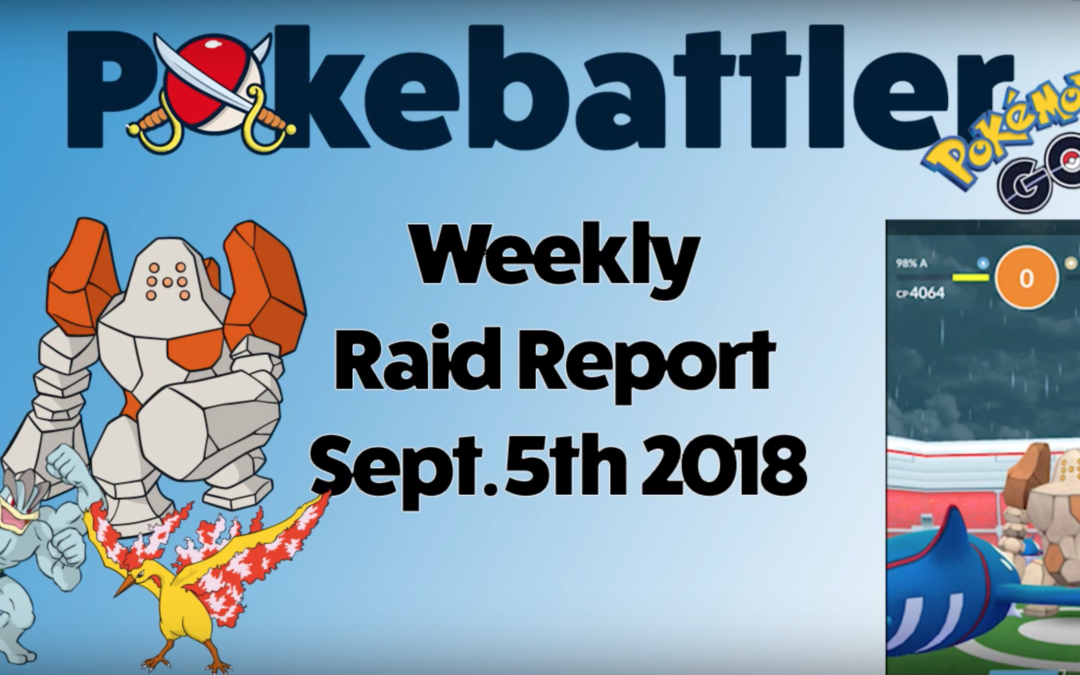 About our new weekly video

There is an amazing amount of content out there on Youtube already regarding Pokemon Go and we were trying to think of some regular content we could provide that would be interesting. We already make video raid guides but those are only once a month at most and aren’t on a regular schedule. Then while pouring over my SEO rankings I came up with it. Why not make a weekly raid report?  All the data is right there in Google webmaster tools! And its not data that other people can easily collect, not even the bigger sites.

How does it work

We use Google webmaster tool impression data to represent what raids people are searching for on Youtube.  If Google’s algorithm decides to show a link to one of our raid results anywhere in the top rankings, it counts as 1 impression. Since our results are consistently in the top 3 or 4 for POKEMON_NAME raid, this is a very good representation of what people are searching for and what raids they are interested in.  Watch the video or read the transcript below and see if you agree with us that the results make sense.

This is the first edition of what we hope will be a weekly broadcast of what’s happening in the world of Pokemon Go raids. Thanks to our site Pokebattler.com, we’re able to offer unique analysis on the ever changing popularity of raids every week.

Right Now we’re currently still stuck in Regi Purgatory. Pokemon Go has slowly been releasing these rather… meh… legendaries so excitement for them compared to previous legendaries is pretty… meh as well. Nevertheless, these mons are legendary, only available for a limited time, and as the tagline goes, you gotta catch ‘em all!

So without further ado, let’s get to the most popular raid countdown.

Number 10 is Tyranitar and we can see why. Holy moly is he useful and constantly comes up as a top counter. Although his rock quick move is no longer available (and totally awesome btw) his other moves are still super strong and of course you wanna get dat candy. He’s a tier four with an estimator of 2.19 at level 35 so you’ll need 3 trainers to take him down usually. If you want to take down Tyranitar, you want to bust out your fighting mons, like Machamp, Breloom, Hariyama, Blaziken and Heracross.

Starting at number 9 is Kirlia. This mon is the second evolution before it’s final current form, Gardevoir. Gardevoir is a decent mon that sometimes comes up as a top 6 counter and comes up consistently in the top 25 as a defender. But… we’re pretty sure the popularity comes from the fact that this is a rare mon and not easy to find out in the wild. The estimate for level 35 is .29 which means you can chop off three limbs and STILL take Kirlia solo. OK, please don’t actually chop off any limbs. But you can definitely solo Kirlia as long as you’re a decent level. Top counters are: Ghost mons like Gengar, Mewtwo and Banette, Steel mon Metagross and poison mons Victreebel and Alolan Muk.

Number 8 is Articuno! 3 days, as Articuno was available in Japan for a day with hurricane. Apparently we’ve got a fair amount of users in Japan. I always like to say Pokebattler, we’re big in Japan. He is a very strong ice Pokemon so we can see why he was popular there..We won’t bother going over his counters because he’s not available right now or any time soon as far as we know.

Number 7 is Absol! Absol is pretty useless, but he’s only available in raids and he is tier four which means you can’t take him solo. His estimator is 1.69 so you definitely need a friend to take him. Fighting mons like Machamp, Breloom, Hariyama, Blaziken and Herocross will take this mon down.

Number 5 is Moltres! Moltres is coming out THIS WEEKEND for 3 hours this Saturday so hold onto your butts. We think Moltres is THE strongest and therefore super useful fire mon. Check out our recent infographic for the best counters at articles.pokebattler.com and you’ll see they’re  mostly Rock Mons including the super strong double rock Tyranitar that is a legacy from community day, both Alolan and regular Golem, double water Kyogre, then back to rock dudes including Regirock, Luna or Sol Stone, and Rayquaza with Ancient Power.

Number  4 is Mewtwo. We’re still getting those ex-raid passes and people are still using them! Finding the best counters for Mewtwo can be complex, we recommend you check out our infographic article on him with a link in the comments. With an estimate of 2.69 at level 35 you’ll need at least 3 trainers. And if I were going after a Mewtwo with unknown moves, I’d want an army of double dark Tyranitar, some psychic ghost Mewtwo, and maybe a double dark Houndoom or two.

Number 3 is Ho Oh! He was recently out for a fews, ending on August 27th. Ho Oh can be useful with his Solar Beam move although autosuggest loves him way too much and will suggest a super low level Ho Oh even when he’s really not the best choice at all. He is a top 20 attacker so he’s not useless, but… beware of using your low level Ho Oh when you’ve probably got some some strong mons instead. Ho oh is no longer available so we won’t go over his best counters.

Number 2 is Machamp! He’s the strongest fighting mon in the game and a very strong counter against a lot of differnet mons and is a top 10 attacker in our rankings. He’s tier 3 and with an estimator .76 at level 35, you can totally solo him if you’ve got the right mons. Those mons are double psychic Mewtwo and Alakazham, a fire and flying Moltres with Sky attack, a move that will only be available THIS SATURDAY Sept 8th, Double Psychic Espeon, Double Flying Rayqauza, and Physic Fairy Gardevior.

Finally number one is…. Regirock! Not surprising as he’s the main legendary out right now.  And despite being not super useful, he is still popular. To take down Regirock, you need around 5 trainers at level 35, with an estimator of 4.22 so hopefully you can find join some raider groups. His top counters are double fighting Machamp, Double Water Kyogre, Mud shot Solar Beam Groudon, Double Fighting Breloom and Hariyama.

So that’s it for our weekly raid report. Check in next week to see what pops up on our raid charts. Subscribe to make sure you don’t miss our next video. Later!

The plan is to do this weekly however real life events are rapidly approaching. Mrs Pokebattler is quite pregnant and the baby is due October 23rd. As you might expect this will impact our schedule!  Even so, this sort of video is not that much work to do so perhaps while the baby sleeps.  In the meantime, Wednesday mornings will be the schedule for our raid report.