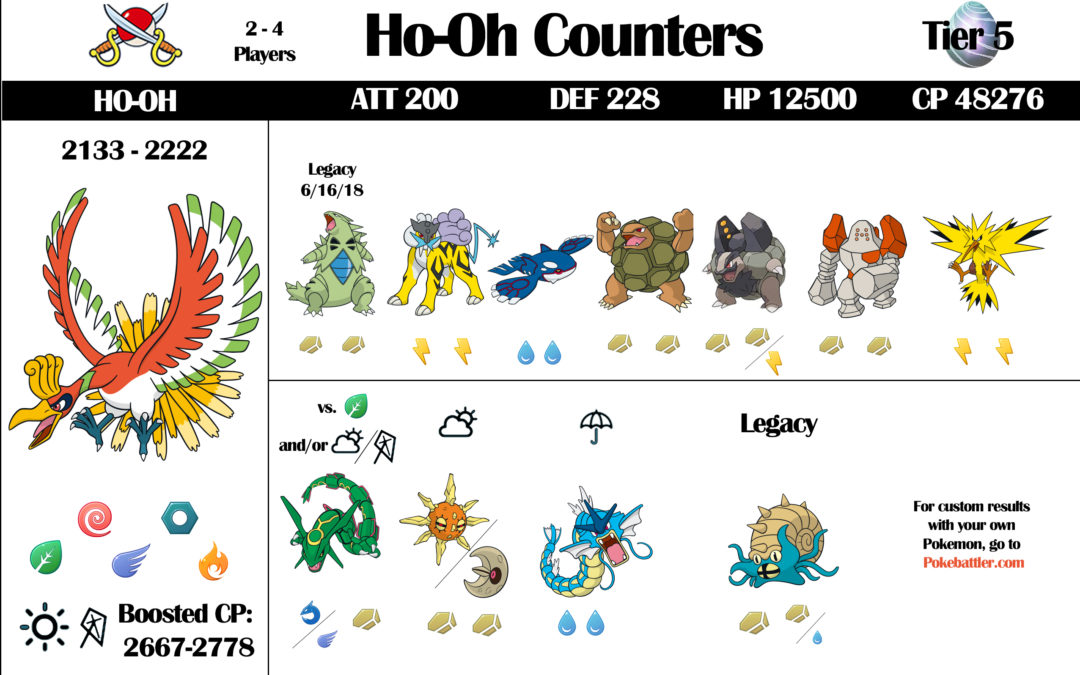 How to use this infographic:

Ho-Oh is back AGAIN for a limited time and we decided it was time for an infographic update as several recent legendaries make an appearance as very strong counters.

Overall, Ho-Oh isn’t exactly one of the strongest legendaries. In fact, although we’ve caught a fair amount, we’ve never bothered leveling one up to use in raids or gyms. Ho-Oh is a favorite of auto-suggest in the game, similar to Aggron, as he’s tanky. But like Aggron (as this video shows), Ho-Oh is not a strong attacker so it won’t come up very often as a counter in Pokebattler. In fact, I’ve considered deleting most of my Ho-Oh as they so often come up in auto-suggest even though they aren’t powered up, and generally aren’t a good choice. Yet still, I find myself going out to raids to catch more of him. Because I’m ridiculous. That’s why. And Ho-Oh is pretty and can be shiny now woot!

But if you are going to bother leveling up a Ho-Oh, you want the Steel Wing/Fire Blast move-set. He’s a fire and flying type making him a top 3 choice for Regice.  Ho-Oh will be about 40% tankier than Charizard in this fight while doing about 10% less damage while being considerably more consistent. A decent trade-off in most situations. Ho-Oh will also be the only Pokemon capable of getting a full 3 damage balls against Regice without rejoining. Who am I kidding? If you have stardust to spare, sure, use the Ho-Oh candy you get from catching Ho-Oh to power up Ho-Oh to level 30 or so. But once you are out and need rare candy, power up all your Entei and Moltres first. Then consider powering up Ho-Oh. And then don’t.

As before, Ho-Oh is quite a tricky boss. Each of the special moves is going to destroy some of the top counters. This makes it hard to make infographics for and even harder to choose the right counters. We highly recommend creating an account and putting your top Ho-Oh counters into your Pokebox. Then, the Ho-oh raid guide will give you the best counters by move-set.  With all that said, here are the general guidelines:

He’s fairly easy to trio with an army of weather boosted double rock Golem, however, read to the end to find out about a possible duo if Ho-Oh runs late or a new move is introduced early. For those curious, army is defined as a group of 45 Golem level 35+ which can beat Ho-Oh with plenty of time to spare even with 2 rejoins.

So let’s get to the Counters.

Smack Down Tyranitar is a beast once again. He has seriously been topping seemingly all our infographics lately!. As a level 25 Tyranitar is safely better than a maxed out level 40 Golem and a level 30 Tyranitar easily smokes this entire list.  A pair of trainers with level 35 Smack Down/Stone Edge Tyranitar can duo a Ho-Oh without friend bonus!

The strongest electric in the game kicks Ho-Oh’s butt because of electric’s super effectiveness against flying and the amazing double bar Wild Charge. Raikou can also survive all 3 of the special moves coming from Ho-Oh. The double bar attacks increase the consistency of Raikou and definitely feels like more DPS than the slower Kyogre. This is actually true until level 31 but as Kyogre gets tankier, Kyogre gets more and more strong.

The strongest water Pokemon in the game comes in as a strong counter with its super effectiveness against fire, Ho-Oh’s other type. Kyogre is by far the best counter if you don’t know what’s coming. And even if it’s Solar Beam, a high-level Kyogre will be able to survive. How do you know it’s Solar Beam? Usually, you can tell because no rock types will be suggested. Even then it’s still #2 at level 40 behind <spoiler removed>. Kyogre is a great choice for using rare candies on as it is unlikely to be surpassed as a water attacker any time soon.  Every power up helps as you want to get enough health and defense to survive solar beam and enough quick attacks to get off a hydro pump.

Double rock Golem is super effective against both fire and flying making him a formidable opponent against Ho-Oh. This makes Golem the best non-legendary/legacy choice in most situations. Golem also has the pleasure of being highly selected by auto select, unless it’s Solar Beam, which is almost correct! Rename your highest Golem with Stone Edge as Solar Beam Detector today!  Note: Golem drops to #9 vs. Solar Beam with nearly 80 deaths. That’s about 12 seconds per Golem on average so expect to rejoin. Don’t use Golem against Solar Beam.

Always nearby regular Golem, if you’ve managed to have been gifted an Alolan Geodude, and managed to power up him, he’s ready to rock (or zap) against Ho-Oh.

We made a big deal about how this regi bro was pretty darn useless, but as he keeps coming up as a top 6 counter on our infographics, maybe we should eat our words a bit. Don’t get us wrong, he’s still weak on attack and only the third strongest rock mon, but here he is again, useful against Ho-Oh. Oh who are we kidding. He’s a worse version of Golem that requires rare candies. Not great outside of novelty effect and unique Pokemon kill attempts.

Flying Raikou makes a good stand against Ho-Oh as the second best electric in the game. It also does well against Solar Beam due to its Flying type. Unfortunately, even with Thunder Shock, missing out on Wild Charge makes Zapdos subpar.

Versus Solar Beam, and in Partly Cloudy and Windy Weather

You can finally bust out those ancient power Rayquaza, if you haven’t TMed them away that is. If you are drowning in TMs, this is a good chance to burn through some. Rayquaza is quite strong against Solar Beam.  And Ancient Power hits like a truck so it should be no surprise that a very high attack Pokemon with a double super effective charge move and a double resist to the hardest special move to survive is great.

Double water Gyarados gets a nice boost in the spring rain to help you take down Ho-oh.

These double rock mon’s have a use against Ho-oh in partly cloudy weather. Not much of a use but better than nothing!

Legacy Move Pokemon from 1 month in 2016

That double rock legacy Omastar is still a rockstar, especially vs. Fire Blast. Too bad almost no one has one. If you have one, rock it! I’m so funny. Wow. Seriously though, we almost took Omastar off the chart but it’s so strong we had to leave it on. Like Golem, we do not recomend using Omastar vs. Solar Beam. Far too high a chance of getting killed before using even a single special.

Ho-oh is not going to be here very long. Thankfully, in my opinion. It’s a difficult boss that requires more raiders to beat than most of the good bosses.  The raid formula tends to make good legendary Pokemon with high attack, low defense easier to beat than bad legendary Pokemon that have low attack and high defense. If Niantic decides to take a full 3 months for the final 3 legendaries, there is going to be a large drop off in raids. Regice, Registeel and Regirock are simply not good in Pokemon Go. And not any good in regular Pokemon either. Alohan Pokemon should spice things up for a short period but I expect something major to be announced at Go Fest this year to keep up the excitement.  The release of double rock Tyranitar this community day shows that they are capable of making exciting Pokemon. Hopefully, they keep up the good work!