Pokebattler vs. In Game Autosuggest with a Jynx Solo, and new full raid simulation Battle Parties! 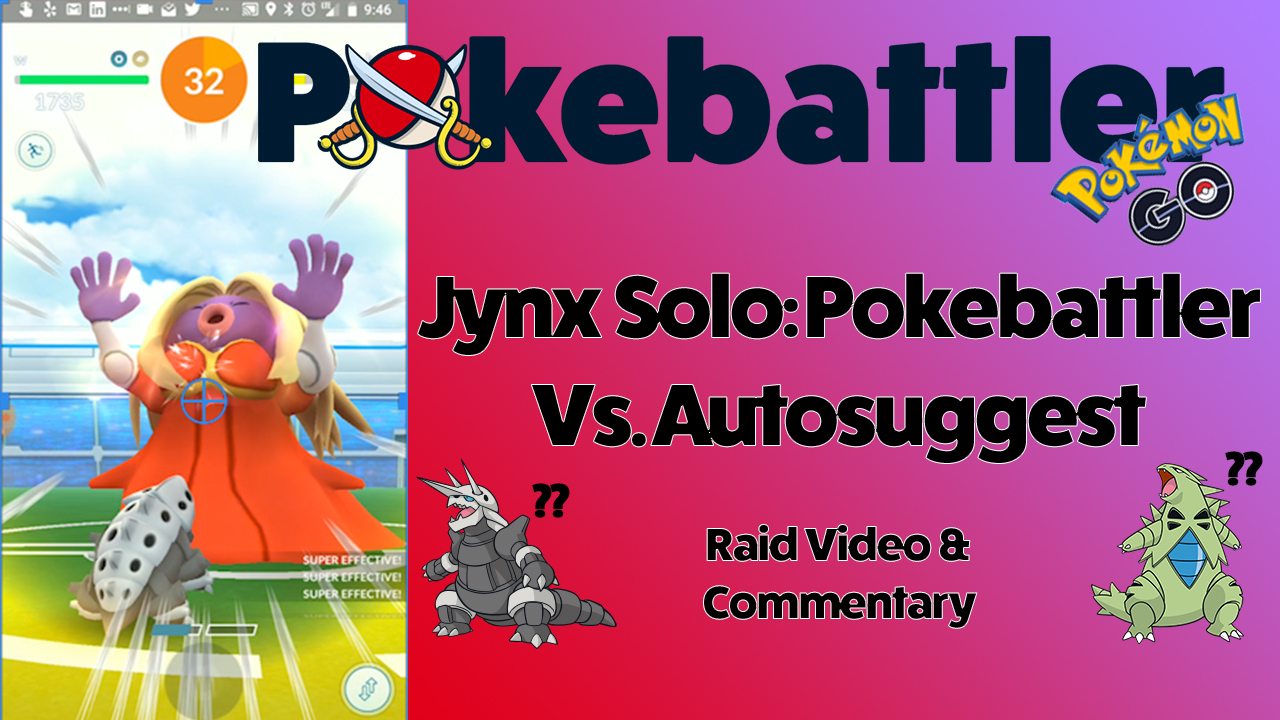 Welcome to another Pokebattler raid video. This is going to look at the difference between the game’s autosuggest and Pokebattler’s suggestions with a Jynx Solo and we’re going to play around with the new battle parties and full raid simulations features.

I’ve been seeing some complaints online about players having difficulty beating tier 3 bosses and how having Aggron being a favorite of auto-suggest in the game causes problems. As this Jynx Solo Raid is about to show you, autosuggest and especially Aggron, can oftentimes suck…

So let’s look at these in-game suggestions… they are a lot of crapola. Aggron, a poor attacker, Kyogre, which generally is a strong choice but not necessarily against Jynx, a low CP Flareon, a 1735 Lairon which is the second evolution before an Aggron which is such a bad suggestion, wow, and my highest Golem. So first let’s look at the autosuggestions in our raid guide, and then our new full raid simulator. Now Jynx is absolutely soloable. But with this lineup? I doubt it. Let’s see what the sims say.

A quick scan in the Pokebatltler raid guide for Jynx shows Tyranitar, Mewtwo, Gengar, Entei, Machamp, there’s our Golem in the top 10, so not a terrible choice, Kyogre way down there with a time to win of 194 seconds, that’s not a good sign. My Aggron don’t even make the list. Now I’m going to create a battle party with the in-game suggestions. First I hit battle parties. I have turned these 6 mons into a battle party which we can then use to do a full raid simulation. Right now this is only available in beta and you must be logged in. Plus it only pulls in mons from your Pokebox stored on here, so definitely need to be logged in.

Now our raid guides offer simulations on one Pokemon at a time. It would make suggestions to the top counters that way, but it wasn’t giving numbers based on how all 6 would perform. But now, after a LOT of work by the amazing Celandro, we are able to offer that feature, currently in beta. So let’s see how the game’s suggestions do here. Looks like… we’re going to lose. We only get 180 seconds, and time to win is…. Yikes. Now Jynx is absolutely soloable so that shows just how crappy the in-game suggestions are. But let’s see how we actually do in the game here.

So I expect to lose this and then hopefully I can rejoin fast enough to use the same raid pass here and use Pokebattler’s suggestions as a comparison.

These Aggron are very tanky, I won’t try to dodge, that would make it even worse. One of the issues is that heavy slam is not a good move. Steel moves, in general, aren’t very strong, and Aggron has bad stats in this game and as you can see we aren’t doing very well. We need to hit 50% by 90 seconds to be confident we can beat Jynx here. So while these guys are very tanky, they are not doing very much damage. I may not even get to 20% health aka red in this attempt, yikes.

Stone Edge is very effective but it’s a 1700 Pokemon, so compared to high over 3000 CP Tyrantiar it won’t be very good. We’re at 100 seconds now, maybe 30% of the way in, we’re not doing very well. My Flareon is another bad suggestion. Not doing much damage here. We are way behind, we want to be yellow at 90 and we aren’t hitting that at all. We are yellow at 64. That is not good. I’ll keep going here eating up revives even though I won’t succeed. Don’t think we’ll even hit red, not with this little guy. He’s so cute. And he has heavy slam. He’s tanky, he takes forever to die. And we do hit red with 10 seconds to go and I’m dead.

So I’m going to rejoin quickly here and we will look at Pokebattler suggestions. I won’t cheat and use special move info. First looking at the raid guide, our estimate is .89, cloudy weather. 3 Tyranitar, Mewtwo, Gengar, and finally another Tyranitar.

If we look at the power, it’s averaging out a little under a hundred because of Gengar so we may want to dodge a few specials, but it looks like we have an extra 25 seconds so we should easily beat the clock. It’s easier to dodge now with raid flashes enabled. Now let’s look at the full raid simulator. This handy link turns my top six counters into a battle party and a full raid simulator. And boom. Time to win is 143.5 which means we got time to spare. Should definitely be a big win here guys. Let’s see it in the game.

Here we go. Not doing anything special just using Crunch. You can see damage is much higher than before.

We want to be yellow at 90, I think we will easily hit that. The game probably didn’t pick Mewtwo because the quick attack is not effective, but you can see Shadow Ball does a lot of damage.

We hope you enjoyed this video and subscribe for future videos. Also, you may have noticed we’re doing an experiment on Pokebattler- we’re ditching ads and doing Patreon only, so if you are a Pokebattler user, please consider subscribing. Lots of great benefits and it will keep our site going so more people out there will know NOT to use Aggron no matter how many times it’s autosuggested. Thanks again and see you soon!