Determining Which Gyms Will Get you EX Raid Passes for MewTwo: Part 1. 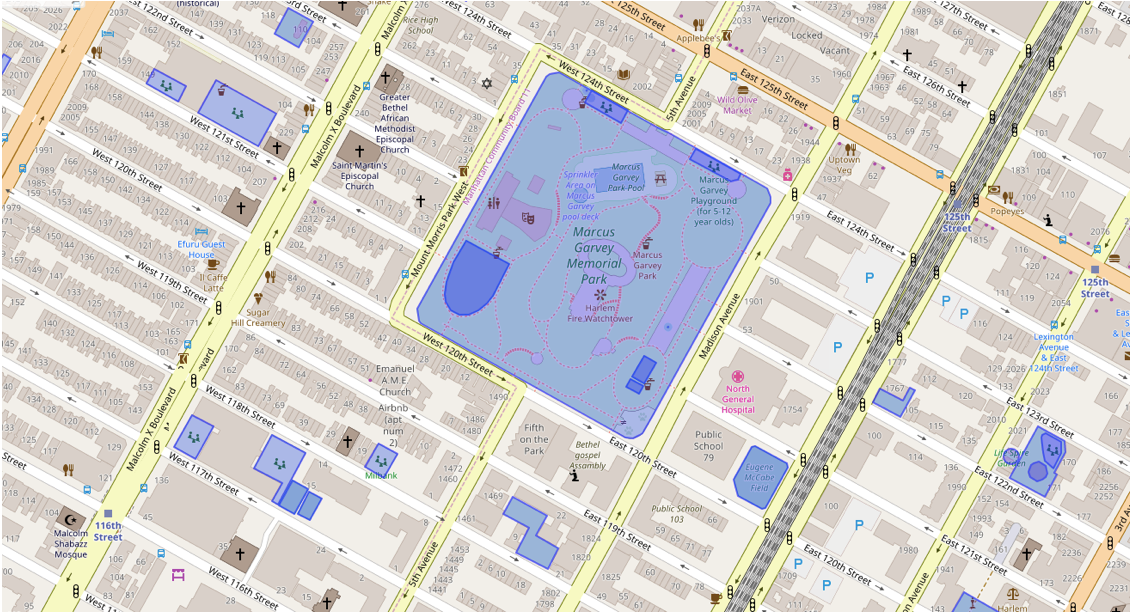 Over the last month, as part of my own journey to finally get an EX raid pass, I began researching the eligibility criteria for EX raids. I reported my findings via reddit along the way, (Original posts can be found here, here and here).  but wanted to have an opportunity to pull together my findings into one (relatively) concise document.

As part of my study, I compiled a large list of over 1000 non-sponsored EX raid locations from different countries around the world, including Australia, Canada, France, Germany, Singapore, Hong Kong, the United Kingdom and the United States. I then compared the locations of each of these gyms to data exported from OpenStreetMap to discover what selection criteria Niantic must be using to select which gyms can host EX raids.

In this first article, I will be outlining three key findings which I made related to whether or not a gym can host EX raids. In my second article, I will explain how this information can be used to generate custom maps to visualize eligible EX raid gyms.

Finding #1: Niantic’s definition of ‘parks’ relates to tags on OpenStreetMap.

OpenStreetMap is the Wikipedia version of a map. It is map formed by the contributions of editors around the world. In addition to mapping roads, OpenStreetMap allows users to map a variety of features such as parks, gardens and golf courses. Niantic uses these features from OpenStreetMap as the basis for nests.

On 21st November 2017, Niantic stated as part of their Developer Insight that “EX Raid Battles will take place most commonly at Gyms found in parks and sponsored locations.” Niantic’s definition for parks here matches their definition for nests. In particular, my analysis of EX raid locations has found that all non-sponsored EX raids since November 2017 have been associated with one of more of the following tags on OpenStreetMap:

There are two additional OSM tags which are associated with nests which are expected to produce EX-raids, but have not yet been confirmed:

Every EX raid location in my analysis corresponded to an appropriately tagged way on OSM. None of the EX raid locations are tagged as multi-polygon relations. This is a key difference to nests, which correspond to both ways and relations. As a result of this difference, parks marked as relations on OSM may visually look like parks on the editor and may have nests, but be unable to host EX raids.

It is possible to visualize the EX raid-related ways in your local area using the following overpass-turbo query: http://overpass-turbo.eu/s/vs3. Simply navigate the map to your area and click ‘Run’. Areas with confirmed EX raid tags will be shown in blue, with unconfirmed areas shown in grey.

Finding #2: Niantic is using OSM data from 2016 to determine whether gyms are in ‘parks’

For each EX raid location, we can look at the dates in which parks were created. A number of EX raids occurred in locations that were not created until July 2016:

Determining the latest possible date of the OSM data requires an EX raid to be located in a park which has since been removed or modified. This is not frequent, however, there are a few gyms which do fit these criteria.

This means the data used for determining whether gyms are in parks was taken from a snapshot of OpenStreetMap from somewhere between 15 July 2016 and 31 August 2016. At this stage, we are unable to provide a date any more specific, but given that park additions seem to be more frequent than park removals, it is likely that the OSM data is from earlier in this time period as opposed to later.

It is important to note that the date of the EX raid park data is different to the data used to determine which parks are in nests. Nests use data from January 22, 2017, so it is possible to have an area that is a nest but cannot host EX raids, and vice versa. Additionally, the visual data in the game was formerly using OSM data from August 2017, and was recently updated to use OSM data from December 2017. Altogether the fact that EX raid data, nest data, and visual map data is unsynchronised makes it difficult for players to determine whether a gym is inside a park for EX raid purposes.

Finding #3: Niantic uses s2 cells to determine whether a gym is ‘inside’ a park

S2 cells are a way of mapping the world with cells of various sizes. The cells range from level 0 (covering 1/6th of the Earth’s surface) down to level 30 (smaller than the size of your fingernail). Different level s2 cells are used in Pokemon Go for different purposes, including setting the capture location of wild Pokemon (level 10 cells), determining which Pokestops will turn into gyms (level 14 cells),  determining which Ingress Portals will become Pokestops (level 17 cells) and be determining the location of individual spawn points (level 20 cells). These cells can be visualized using Sidewalk Labs region coverer. 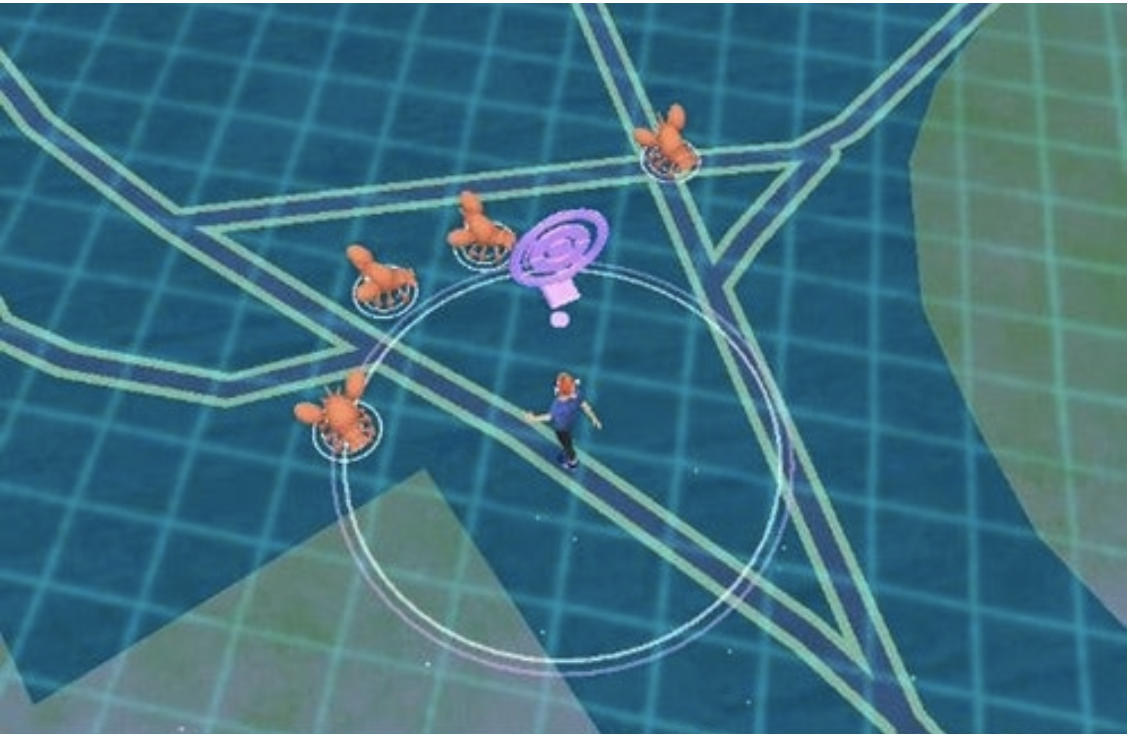 The game uses a similar mechanism to determine whether a gym is inside a park, albeit using OSM data from a different time period. For each gym, the game finds the level 20 cell containing the gym and then checks whether the center of the level 20 cell is inside the park. For gyms that are well inside their respective parks this is fine, however, it can create some interesting situations for gyms which are located close to the borders of their parks.

Gym A and Gym B are both eligible for EX raids because each gym is located in a cell whose center lays within the park polygon. This is true even though the actual physical location of Gym B is outside the park polygon. 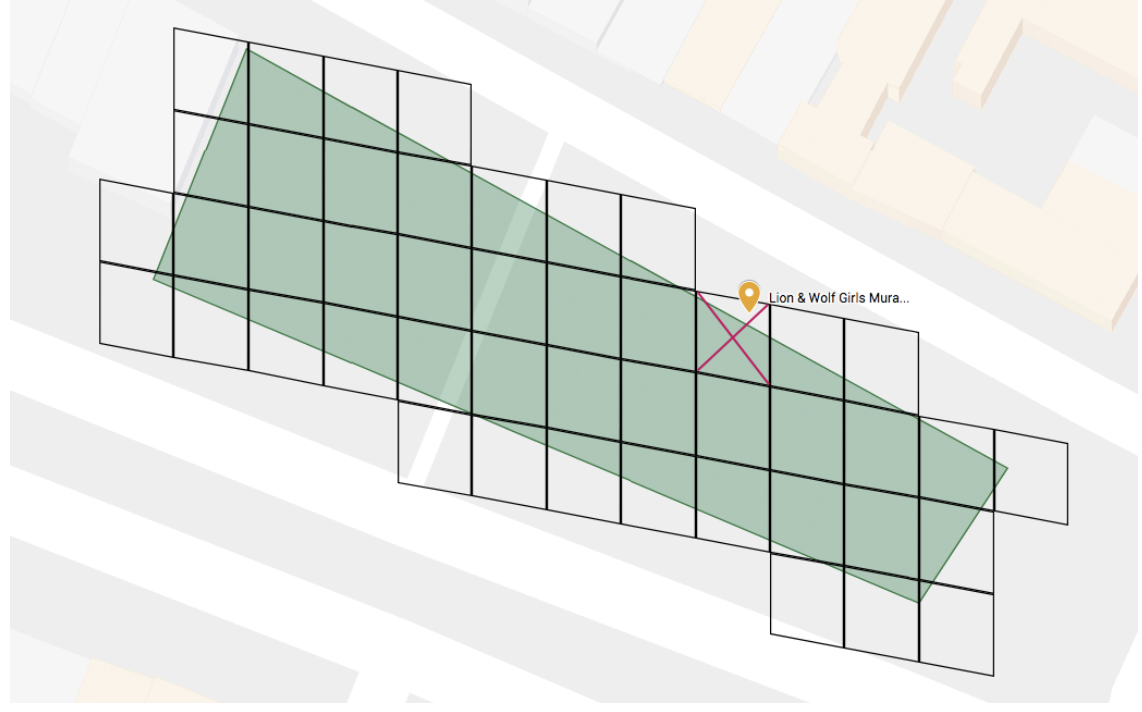 In Part 2, which we will post in a few days, I will explain how this information can be used along with various tools to create maps of EX raid eligible gyms.