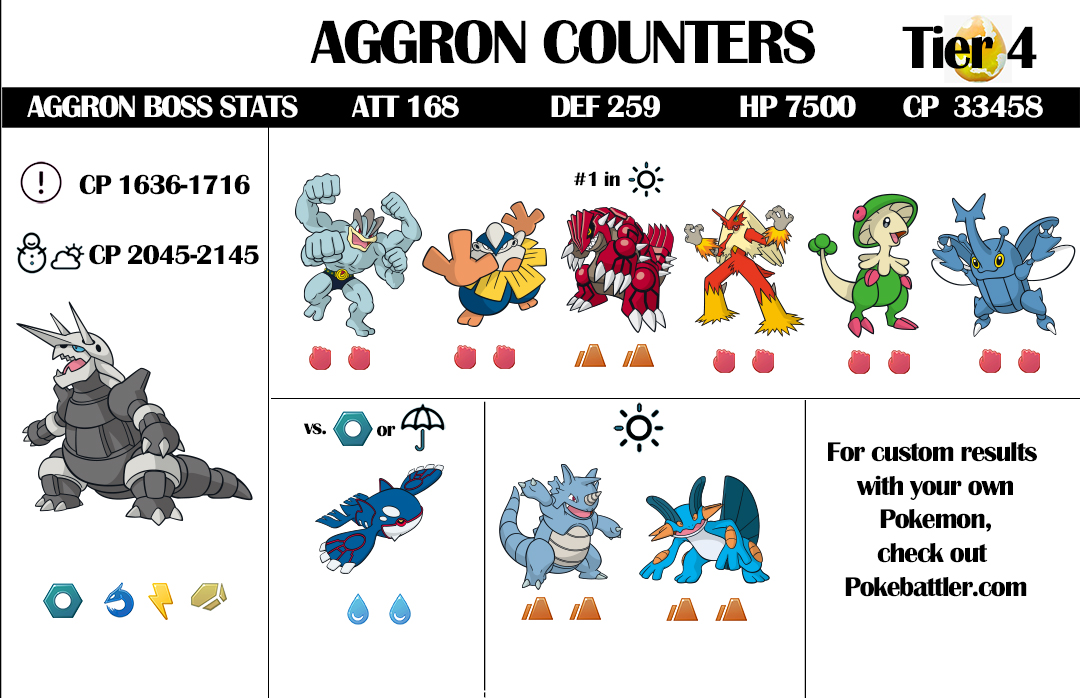 Getting to know Aggron

The latest Pokemon Go update brought us a new Tier 4 raid boss: Aggron. He happens to be the toughest tier 4 raid boss to beat, needing a minimum of three trainers to take him down. Why? He has strong defense. And while normally, when he’s not a raid boss, he has weak HP (stamina), making him a weaker defender, because all raid bosses get the same HP within the same tier, it makes him extra hard to beat in a raid. Now maybe you’d assume that his being so hard to take down would mean he’s going to be a useful Pokemon for raids and battles in the future right? Then you’d assume wrong. He’s really not. He’s the best steel type available, but that means nothing because steel generally sucks. Steel moves are just weak in general. Also, his attack is weak. He’s kind of like Blissey, he’s a giant pain to take down, but he’s not very useful when it comes to taking down other bosses. Except he’s not even a good gym defender. Pft. But you gotta catch ’em all right? Read on below to see how to take him down.

Edit: Someone pointed out he may be useful against future fairy legendaries, although other stronger steel legendaries (Metagross?) may come out before him and be stronger than him. So there’s a chance he may end up useful in very specific situations…

Double Edit: Aggron has been duo-ed! It was a VERY lucky and rather unique situation as far as we can tell, but they did it! Check out the video!

Aggron has double weakness, known as 4x, against both fighting and ground. And as you’ll see below, the strongest fighting and ground Pokemon will be your best counters. Weather doesn’t cause any huge variations besides clear weather making Groudon stronger than he already is, and putting Kyogre as the 4th best general counter when it’s rainy, making this infographic much more simple (and easier to Photoshop, which we very much appreciate).

Aggron ain’t anything special. He does, however, show up in the top 20 rankings for attackers and defenders ONLY in snowy weather and only under double steel moves. So if we had to choose his best moveset, it would be Iron Tail and Heavy Slam.

Machamp is the strongest general counter for Aggron, so hopefully, you’ve got your Machamp army from your Tyranitar raids ready. Dynamic Punch with Karate Chop or Counter are your best bets, but any double fighting Machamp will work well.

Hurray, a use for a non-legendary Gen 3! That doesn’t happen very often. Baby Machamp is your best bet for general counters after Machamp, but only if he’s got double fighting. Is it worth TMing your Hariyama to be double fighting to take down Aggron? Maybe. Double fighting will definitely be his best moveset, and he takes way less candy to evolve than Machamp. But Machamp is definitely the top fighting Pokemon. It really depends on the size of your Machamp army (or lack thereof).

Groudon becomes useful once again against Aggron with his double ground moves, ESPECIALLY under clear weather where he becomes number one. Groudon with Solar Beam is still more useful in general, but as he is a ground Pokemon, having a decently powered up Groudon with double ground moves would be nice to have in your Pokemon arsenal.

Fighting really is strong against Aggron, making these less strong fighting guys still useful. None of them are worth spending tons of stardust or TMs on though unless you really can’t get a hold of enough of the guys mentioned earlier.

Kyogre: Good vs. Steel and in Rainy Weather

Machamp is slightly weaker against steel moving him behind Groudon, but other than that, none of his movesets have a ton of variation for counters with one exception: Kyogre. Kyogre becomes a good counter against Aggron when he has double steel moves, although he barely makes the list in the scenario. However, he becomes the number four counter behind Groudon in rainy weather. So if you’re somewhere other than LA (where it NEVER rains) that means you get to start using those Kyogre you just caught. Lucky.

Aggron is tough to take down but has very obvious and specific weaknesses making fighting him simpler, if not exactly easy.

Make sure you check out our new Raid Advice tool to see how to best spend your stardust and candy. Check out our tutorial video about it too. And remember to check out our custom raid guides using the Pokebox feature to see which of your own Pokemon are best. Happy Hunting and thanks for reading!