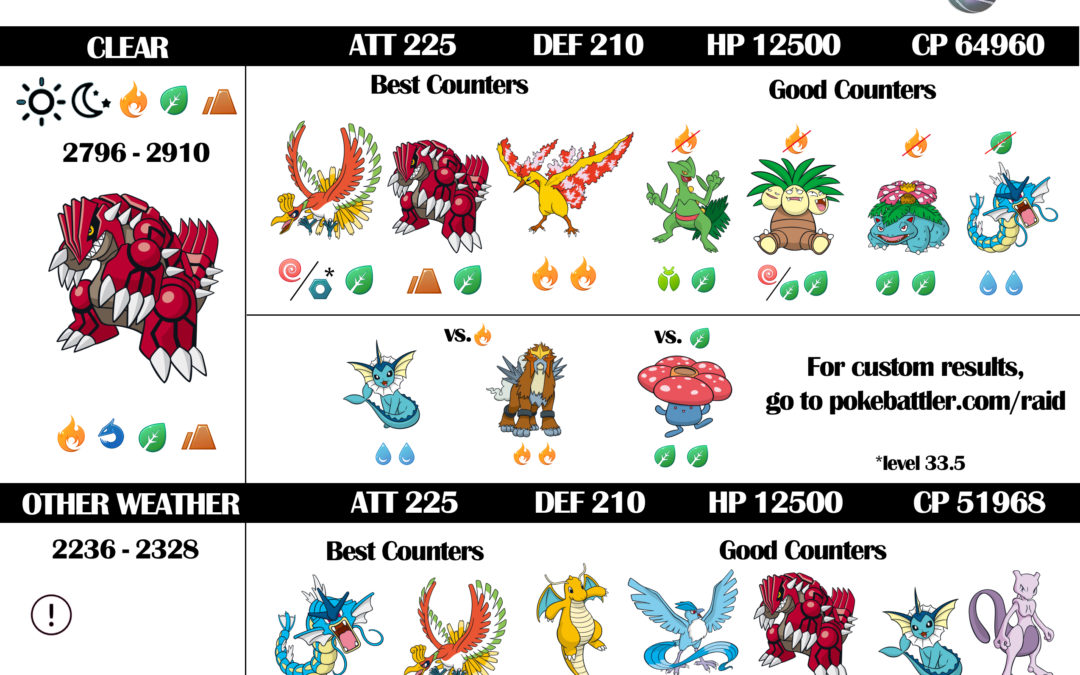 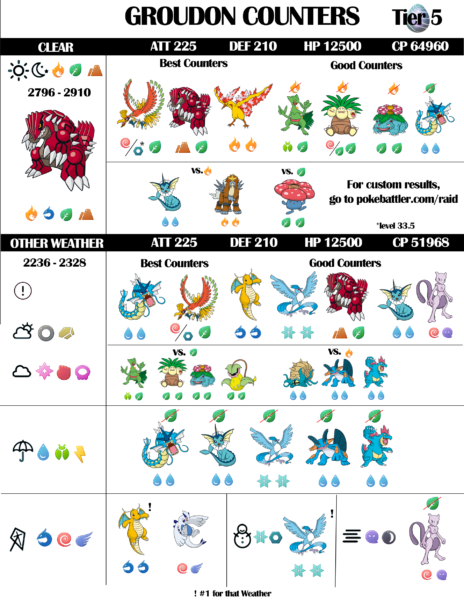 Groudon is an awesome new ground Pokemon. A level 25 Groudon is likely going to be putting your level 30% Rhydon out to pasture. He is a great gym sweeper in any weather but especially clear weather! Each special move Groudon has is useful in different situations so you will want 3 of them. With a top level 40 CP of over 4000, Groudon is going to be a great Pokemon but unsurprisingly a very difficult raid battle boss! Far tankier than Mewtwo and punching 3 huge hard hitting special moves, you better come prepared.

First things first: Unless you live somewhere where you never get clear weather (in which case, our condolences), you should be trying your best to catch a Groudon during clear weather to get that beautiful CP boost to save yourself plenty of stardust and rare candy. Starting a level 25 instead of level 20 is a big deal! So we designed our infographic as featuring the best counters during clear weather because we figure most people will be striving for that scenario. Unfortunately, clear weather also makes him even harder to beat. Clear weather should also be the most common weather world wide (sorry London and Seattle) so hard mode Groudon will be quite common.

Groudon is a particularly difficult raid boss to make an infographic for as every special move hurts most of the strongest counters. In clear weather, with a 20% damage boost, it’s a bit like rock paper scissors. Gyarados for example is an awesome counter against Earthquake and Fire Blast but gets destroyed by Solar Beam. All those grass Pokemon are great against Solar Beam but get destroyed by Fire Blast.  There are only 3 Pokemon in the game who do not suffer from this rock paper scissors situation and they show up prominently in the counters for clear weather, which we’ve listed below.

Boost to Ground, Grass and Fire, aka all of Groudon’s special moves makes this a crazy difficult fight. Expect to get hit hard. That said the most well prepared players can beat Groudon with as few as 3 players so long as it isn’t Solar Beam.

These counters are the best options to choose if you don’t know what moves Groundon has.

Hurray, a use for all those Ho-Ohs you hopefully recently caught! Believe us, Ho-Oh isn’t very useful in general, so it’s exciting he comes up at the number one counter here. He is only useful with Extrasensory and Solar Beam unless he’s above level 33.5, in which case his Steel Wing hits a breakpoint and is slightly stronger than the psychic option.  He is a particularly strong option against Solar Beam but does well across the board.

So this is only helpful if you’ve already caught a Groudon and powered it up a bit, and he has a very specific moveset (Mud Slap and Solar Beam) but in case you happen to have that, then you’re good to go.

This fiery bird kicks fiery butt. He gets 20% more damage to all attacks and survives all the specials in clear weather. That extra flying type really helps over other fire attackers in this battle.

These counters are great in some matchups but have severe weaknesses in others.

If you’ve managed to catch a bug, grass Sceptile, you’re in luck, as long as Groudon doesn’t have fire. Sceptile is the highest DPS option for 3 man attempts but he is a bit of a glass cannon.

Another strong counter against Groudon as long as he doesn’t have fire.

Also a great counter against Groudon as long as he doesn’t have fire. Notice a pattern yet?

I’m sure some people are shocked to see Gyarados this low. Sure, Gyarados is a great counter for Fire Blast and Earthquake. Go ahead and put him up with Ho-Oh if you know ahead of time what you are facing. The problem with Gyarados is a 20% boosted Solar Beam will often kill him before he can get off even one Hydro Pump! This is particularly common in a large raid group as Groudon will have enough energy to spam solar beams on average every other attack! So if you want to get extra damage balls in your Groudon raid battle, don’t automatically reach for Gyarados unless you’re sure he isn’t Solar Beam.

Vaporeon is only good against fire but not as good as Gyarados. Waterfall definitely shook up the rankings.

With a boost from clear weather, sometimes it is good to use fire to fight fire. God that was cheesy.

You may not be able to use Entei against Solar Beam, but you can bust out your Vileplume. Then instead of healing it you can trash can it! I’m only half kidding.

Unboosted General Counters – All Other Weather

Outside of clear weather, the counters shift quite a bit. The problem of being able to survive a special to be able to get your own special off mostly goes away when Groudon is in unboosted mode.

Now Gyarados, with that wonderful new Waterfall move, comes out ahead as much of the chatter on thesilphroad subreddit suspected. Without the 20% additional damage, Solar Beam is not as deadly.

Ho-Oh continues to be a strong counter with no weather as a nice tanky counter.

Reliable ol’ Dragonite is strong with double dragon moves in no weather.

Double Ice Articuno appears as a good counter if you happened to power one up like I did.

Sometimes you gotta have Groudon to beat Groudon.

Basically a slightly weaker version of Gyarados, oh how the tables have turned with the new waterfall move!

It’s not a real infographic if Mewtwo doesn’t make an appearance with his ever powerful psychic and Shadow Ball combo, it’s just so gal darn strong.

These grass bros are all strong against Groudon with Solar Beam.

These water bros can put out a Groudon with fire with gusto.

So basically none of the Pokemon that get boosted with cloudy or partly cloudy are boosted enough to be worthwhile against Groudon, making extreme weather (which offers no boosts) have the same counters as cloudy and partly cloudy.  The general unboosted counters above are what you are looking for here.

The Water bros get a great boost under rainy weather against Groudon but beware: none of them can handle Solar Beam. If you have a Groudon with Solar Beam, keep using Articuno or those Solar Beam and Leaf Blade wielders.

He’s in his strongest form in this weather with his two strongest moves, Waterfall and Hydro Pump.

Coming in strong behind Gyarados as a good water bro.

Two more water bros that get a boost in the rain, these guys are decent counters.

Windy gives Dragonite such a big boost, he becomes the number one overall counter in this weather.

Tanky Lugia becomes useful in the wind with his flying charge move.

Articuno gets such a boost in the snow, he becomes the number one counter in this weather! All that rare candy wasn’t a total waste. Other than that, see the general non-weather counters.

Fog gives ghost Mewtwo a nice boost but don’t use him against a Groudon with Solar Beam. Refer to the general non-weather counters in that case.

There have been quite a few changes behind the scenes since the last update. The new UI has greatly improved dps for all players. I also have moved the start time for raids by 2 seconds due to the current start time bug. Finally, with the release today I am tweaking the Overall rating to be more dps oriented. Since you can now rejoin the raid without losing your damage balls, the need for Power has been reduced. The new weightings are 2/3s time to win, 1/3 power for tier 4 and 5 raids, and 3/4 time to win and 1/4 power for all other raids and for all gym combat. This will shift the rankings around, particularly on defenders as punching bags like Slaking will show up a bit higher.

Weather really tosses a wrench in these infographics making them hard to make and hard to understand. This is our second attempt at a weather infographic and think this one came out quite well! Groundon is a difficult raid boss and even more difficult in Clear weather. And you really want to catch him in Clear weather if you can. If you don’t have any powered up Ho-Oh’s, don’t despair. Just try your Gyarados’ and if its Solar Beam, try again with your grass Pokemon. Or you can do what I do, look at what moves are auto selected. You can often tell what special move is coming by looking at that. If its picking Gyarados, its definitely not Solar Beam. If its picking Exeggutor, its definitely not Fire Blast.