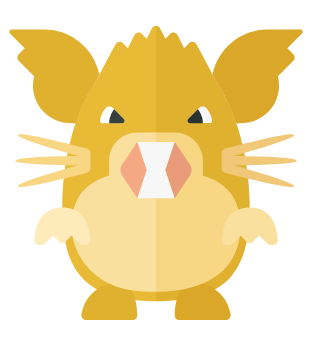 Before Gen2 release, everyone knew that catching Rattata was not only useful for the Youngster medal, but with Bite / Hyper Beam it was actually a good neutral-matchup prestiger.

The bad news is that now Bite / Hyper Beam sucks. The main function of the non-STAB move Bite was to charge the energy bar, and now Bite only charges 4 energy per move, i.e. 8 EPS.

Here is Raticate’s relative performance (in terms of combined time and revive efficiency) against some of the most common gym sitters according to my CP efficiency calculator:

The numbers don’t look incredibly high, but they are referred to the very best specialized prestiger for that specific defender. Raticate has a decent to good CP efficiency against 4 of the Big 7, therefore being a good backup solution if better prestigers are rare (or much less common than Rattata) in your area. Worst case, a throwaway Raticate can be seen as a free revive + super potion.

Hyper Beam and Hyper Fang have similar performance, Hyper Fang may be slightly better due to its greater flexibility as a 2-bar charge move and the shorter duration that may allow to dodge more charge moves.

TL;DR: Catch every Rattata you see, evolve level-26+ ones and keep Raticate with Quick Attack / Hyper Something in prestiging range.